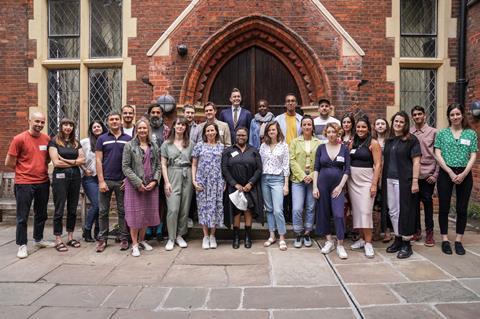 Creative England’s iFeatures – the low-budget feature initiative backed by the BFI, BBC Films and ScreenSkills – has named the 12 projects that will take place in the latest round of its development lab.

Participants include Anna Griffin, a former Screen Star of Tomorrow who has credits including as co-producer on The Levelling and full producer on Calibre, both through her time at Wellington Films. Her project Boa Constrictor is from writer-director Tom Haines.

Another former Star on this year’s roster is Helen Simmons, who has worked as a producer on Harry Michell’s Chubby Funny and upcoming Ilkley. She has written the script for Maria, which is directed by Stella Scott and produced by Sorcha Bacon.

Also on the list are producers Emilie Jouffroy and Kamilla Kristiane Hodøl, the BFI Vision awardees at Elation Pictures, whose credits include 2017 London Film Festival premiere Tides. Their project The End is from writer-director Maria Martinez Bayona.

iFeatures is renowned for the success of the Bafta-nominated Lady Macbeth and 2017 Toronto premiere Apostasy, as well as two titles in this year’s Cannes Great 8 showcase (Make Up and Perfect 10). It was relaunched last year as a year-round lab taking filmmakers through an entire cycle of development.

Last year, iFeatures took on the BFI’s diversity targets for its selection. This year’s crop features 50% female directors (down from 58% last year), and 42% BAME directors (up significantly from last year when only 25% of the projects had any BAME participants). There is also one filmmaker who identifies as having a disability this year.

Across the next 12 months, the filmmaking teams will participate in residential programmes designed to develop scripts and gear the projects up for production. As per last year, the BFI and BBC have jointly committed to ensuring that at least three of the selected projects progress to production. This year’s programme has enlisted Suzy Gillett as the lab producer.

Of the 12 projects that entered the lab last year, Creative England says each now has a developed script and package, and are being taken to market by the producing teams. The organisation continues to support projects informally after the end of the programme, if required.

The selected projects and teams are: