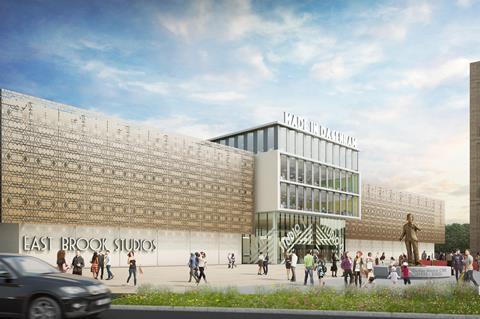 A CGI mock-up of how the facility could look.

A newly-published study has backed the proposal for the building of a major film studio in London’s Dagenham East.

The proposed studio, which would be the capital’s largest facility, was previously backed by London mayor Sadiq Khan last year.

Commissioned by the mayor along with Film London, the London Local Enterprise Panel and the London Borough of Barking and Dagenham, the study cites Dagenham East as an appropriate location for such a facility.

The key findings were:

Barking and Dagenham Council will now invite expressions of interest from investors, entrepenuers and businesses regarding the site and will put the formal process to tender in 2018.

The potential site is a 17-acre plot located in London’s East End.

Sadiq Khan commented: “London is a global capital for film - from Bond to Bridget Jones, and Star Wars to Paddington - our capital is world-renowned for its film industry and has at least 40 crews out on London’s streets filming every single day.

“But we mustn’t rest on our laurels. I want London to be the most film-friendly city in the world and today’s study demonstrates the huge demand for large- scale film studios in the UK.

“I am determined to do more to support economic growth and create new jobs across London. A new film studio in Dagenham East will bring hundreds of new jobs to the area, benefiting everyone from carpenters to camera operators.”

The study was conducted by economic consultancy SQW with BBP Regeneration and professor Richard Miller of the University of Hertfordshire.