'Dark' could be Netflix's biggest European hit so far 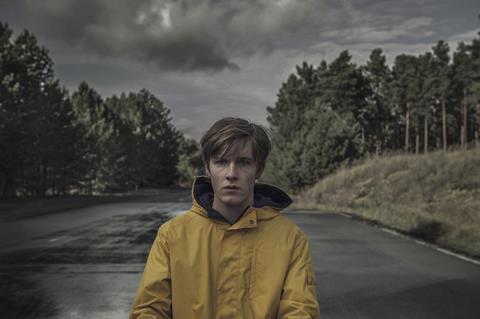 Dark, Netflix’s first German scripted title, could be one of the streaming service’s most successful European shows so far, according to new research.

A report by Los Angeles-based Parrot Analytics found that after the premiere date, Dark has higher global demand than other European, non-english language Netflix titles.

As seen on the chart below, peak global demand for Dark, on the ninth day after the show’s premiere, is 4.5 times higher than the second-highest peak demand, Marseilles’ second day after premiere, making Dark Netflix’s best performing European title so far according to this metric,

Each of the titles below in their first season had very low demand prior to their release, and had all episodes released on the same day. 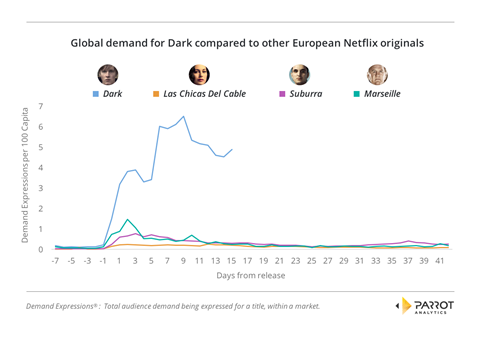 According to the data, Dark has an unusually high global travelability metric of 17.7%, meaning the show travels globally 3.4 times better than the average title produced in Germany. In December, Netflix said that US, Brazil, Italy, Turkey, Spain and France are popular markets for the series.

The graph below shows that Dark has global demand comparable to Netflix’s unexpected summer hit Castlevania. Demand for Dark is approximately a third of the demand that both Stranger Things season two and Mindhunter had in the two week time frame after season premieres. 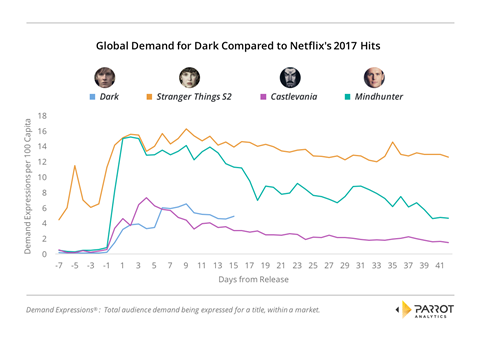 Parrot notes that Dark has a demand pattern that usually appears with titles that are emerging hits. Most Netflix shows have peak demand in the first week and decline in the weeks afterward. Dark and Stranger Things, however, have an increase instead of a decline. Dark increased demand by the most of any of the shows analysed, increasing in demand by 27% from its first week to its second. 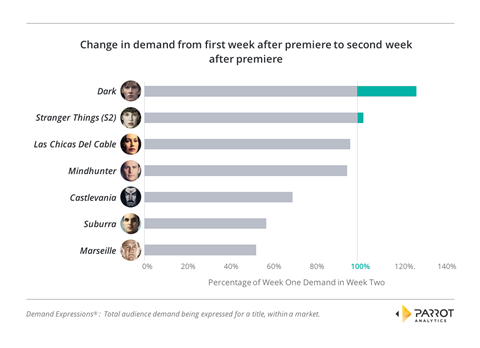 The series had its world premiere at the 2017 Toronto Film Festival and was picked up for a second season by Netflix back in December. Netflix, which does not release viewership numbers, has called Dark one of “the most-watched entirely non-English shows”.

Parrot Analytics measures Demand Expressions, a proprietary metric that gauges total audience demand expressed for a title within a market. Audience demand reflects the desire, engagement and viewership, weighted by importance; so a stream or download is a higher expression of demand than a ‘like’ or comment.