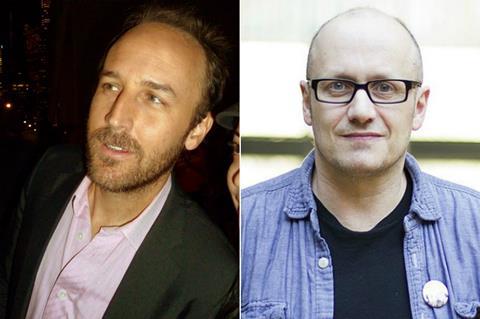 “George Romero was the person that got me into this,” said Blue Valentine director Derek Cianfrance of the horror director who inspired him.

As a child he would watch, and wear out, a VHS of Romero’s 1982 classic Creepshow “every day when I came home from school”.

Cianfrance was taking with fellow filmmaker Lenny Abrahamson as part of TIFF’s Industry conference Dialogues on Saturday. TIFF has helped to launch the international careers of both directors, with Cianfrance’s breakthrough Blue Valentine and Abrahamson’s Oscar-winning Room screening at the festival in 2010 and 2015 respectively. Both now work across film and TV, most recently on the BBC/Hulu’s Normal People (Abrahamson) and HBO’s I Know This Much Is True (Cianfrance).

The directors discussed everything from their approaches to casting through the importance of sympathetic producers to their envy of Mike Leigh.

Growing up in Dublin, Abrahamson’s moment of epiphany came when the babysitter took him and his sister to see Stanley Kubrick’s 2001: A Space Odyssey. He was 11 or 12 at the time, “way too young” to understand what it was about. “But it completely blew my mind. I felt simultaneously excited by it and annoyed by it because it didn’t give its secrets [away] or tell me what I was supposed to think.”

When he was a little older, Abrahamson’s curiosity was further whetted by the BBC show Moviedrome, in which Repo Man director Alex Cox would introduce hidden gems of cinema to UK TV viewers.

Cianfrance’s artistic career began with a tape recorder. During his childhood, he would encourage his grandmother to “tell off-colour jokes” into it and also secretly record his brother. “I’d get him to say something really mean to me and then I would blackmail him with it. Everything I have done with a camera, I was doing with a tape recorder, just trying to catch these moments.”

The school librarian had a camera that Cianfrance, as a teenager, was allowed to use. “Every three months, I would make a new juvenile film about, I don’t know, a rubber bat which attacks people – juvenile stuff, but I was really learning the power and grammar of filmmaking.”

When he was making I Know This Much Is True, in which Mark Ruffalo stars as twin brothers, Cianfrance realised, “Jeez, I was doing exactly the same thing I have been doing my entire life.” The process was just the same as when he was a child, experimenting with the librarian’s camera and making movies with his friends.

Abrahamson’s transition from film lover to filmmaker was not as straightforward. He may have haunted his local video store as a teenager but, as a young cinephile in a small country like Ireland, he couldn’t see an obvious route into the business.

As a teenager, Abrahamson became friends with Ed Guiney who would go on to become one of Ireland’s leading producers and the co-founder of Element Pictures, through which he has produced Abrahamson’s films as well as those of Yorgos Lanthimos and others.

“Ed was a friend from teenage years. He was a classic producer, a person who actually does things instead of dreaming about it,” Abrahamson explained.

Guiney prodded his friend into action, secured equipment and they made a short. However, it wasn’t until Abrahamson directed his first feature Adam & Paul, released in 2004, that he felt he could call himself a filmmaker. Not that success went to his head.

“I am still the same largely miserable, self-absorbed person that I was,” he laughed.

“There is no destination place in this journey. Life is very much the same as it always is,” agreed Cianfarnce, who spent 12 years trying to get his 2010 breakthrough Blue Valentine made. “I think delusion is your friend as an artist. You have to be a little delusional. You have to believe in something that doesn’t exist.”

After his battles to get Blue Valentine made, Cianfrance found his next movie, The Place Beyond The Pines, being greenlit with hardly any struggle.

Abrahamson emphasised the importance of living in the moment and working spontaneously – and not living down to the cliché of the director as tyrant.

“I used to think when I started directing that you’re supposed to walk in with a complete blueprint and layout for everybody exactly what should happen,” he said. “All you are doing then is imposing. No matter how deeply you’ve thought about it, there is something else there when you are with real humans in a real location.”

“It’s control and chaos… script and life, author and actor,” Cianfrance agreed. “It is all these dualities which collide. It’s a mix of ego and humility… I’ve been wrong so many times about telling an actor what to do. An actor’s instinct will be better than what I tell them. I came up with a rule for my actors: do what you want to do, you don’t have to ask for permission. But, at the same time, anything I ask you to do, you have to do it.”

Nor does he complain if someone comes up with a “bad” idea. “I just want ideas. Sometimes the ‘bad’ ideas are the ones that rate gold.”

Abrahamson spoke of the importance of understatement and sensitivity in performance. “I am really not a fan of what I call the fallacy of intensity,” he said. When an actor “revs it to 10,000” on set and the crew applaud the power of the performance, his immediate thought is, “That’s the take I am not going to use.”

Auditions, Cianfrance observed, can be misleading. “I am scared of auditions, a little nervous of them. I’ve seen some amazing auditions where people are so good in the room but then you get them on set… I am scared about giving up the magic too soon. That’s why I don’t rehearse, really.”

Abrahamson acknowledged the twinge of envy he feels (“the most jealousy I’ve had about anybody”) when he sees “Untitled Mike Leigh project” on the slate of Film4, a company he has worked with regularly. Leigh is so venerated he is given complete creative license. “We don’t know what it is, we don’t know what it will be about, we may never see a script. But that’s alright!”