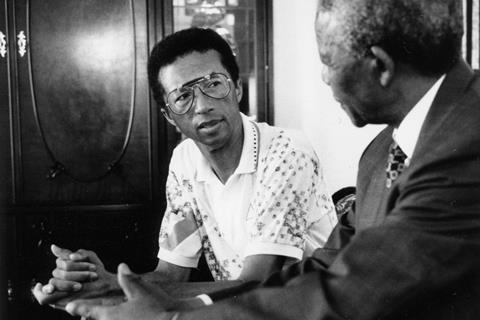 CNN and HBO Max will handle the US release of the completed title in 2022. Details of the release format are yet to be confirmed.

Dogwoof developed and produced the film alongside US companies Rexpix Media, Stick Figure Productions and Get Lifted Film Co.

It is co-directed by Miller and Pollard, with Beth Hubbard and Dogwoof CEO Anna Godas, Steven Cantor and Jamie Schutz producing.

Using archive newsreel, family footage and interviews with tennis players including Billie Jean King, John McEnroe, Donald Dell and Lenny Simpson, the film looks at Ashe’s personal evolution and the cultural resonance of his success on the court.

Ashe remains the only Black man ever to win the singles titles at Wimbledon, the US Open and the Australian Open. He died of AIDS-related complications in 1993; the film will also feature interviews with his widow Jeanne Moutousammy-Ashe and brother Johnnie Ashe.

“Our film is a first-person exploration of Arthur Ashe in his own words, describing his own origin story as a social activist,” said Miller. “He created a unique blueprint for advancing civil rights for disenfranchised and oppressed people throughout the world, amid a tumultuous time of demonstrations and assassinations.”

”I knew little of the obstacles and challenges [Ashe] faced on and off the court in the white world of professional tennis,” said Pollard. ”Working on this film has been an absolute eyeopener into the man, and the player, who faced all of his challenges with a level of dignity and integrity we should all try to measure up to.”

“Arthur’s story is so inspiring and relevant to what’s happening today,” added Godas.

CNN Films previously partnered with Dogwoof on documentaries Fresh Dressed and Halston, which premiered at Sundance Film Festival in 2015 and 2019 respectively.