First image released of Rhys Ifans in the new film adaptation of the iconic work by poet Dylan Thomas. 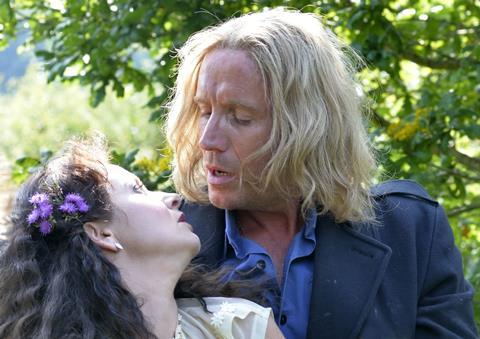 Principal photography on a feature film version of Dylan Thomas’s iconic work Under Milk Wood has wrapped in West Wales, it has been announced by Ffatti Ffilms, S4C, Goldfinch Pictures and Ffilm Cymru Wales.

Based on Thomas’s classic radio drama, the film stars Rhys Ifans (The Amazing Spider-Man 2) as First Voice/Captain Cat, an old sea captain who dreams of his deceased crew members and lost love.

Directed by Kevin Allen, who made Ifans’ breakthrough film Twin Town, the six-week shoot took place in the tiny harbour village of Solva, in Pembrokeshire.

Singer Charlotte Church co-stars as Polly Garter, a woman pining for her lost lover. Other roles are taken by a host of Welsh actors with guest appearances from rugby legend Gareth Edwards and former Labour leader Lord Kinnock.

Allen and Ifans are producers of the film, along with Stephen Malit, producer of Julien Temple’s London – The Modern Babylon. Allen also contributed to the screenplay, written by Murray Lachlan Young with Michael Breen.

Under Milk Wood was first performed on the radio in 1954 and adapted into a film in 1972, starring Richard Burton and Elizabeth Taylor. Allen said his goal is to capture Thomas’ vision while still making his film original.

Versions of the film in English and Welsh – titled Dan Y Wenallt – were produced in succession. Additionally, Ifans will present a making-of documentary as part of the Dylan 100 Centenary celebrations.

The production will be partly financed by Welsh broadcaster S4C and funded through an SEIS structure created by Goldfinch Pictures, an arm of the entertainment accountants Nyman Libson Paul. Ffilm Cymru Wales recently joined the production.

Rhys Ifans is repped by 42, UTA and Brillstein Grey.