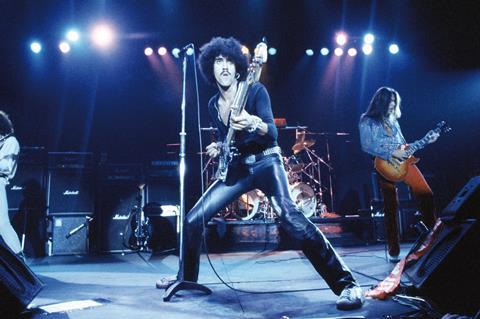 Songs For While I’m Away

The life and music of rock icon Phil Lynott is to be documented in Phil Lynott: Songs For While I’m Away, to be directed by the award-winning Irish filmmaker Emer Reynolds.

The documentary will trace how a young black boy from working class 1950’s Dublin became one of Ireland’s greatest rock stars as the lead singer of Thin Lizzy. Born in Birmingham to a father from British Guiana and an Irish mother, he moved to Dublin as a young child where he lived with his grandparents. He died aged just 36 in 1986.

Phil Lynott: Songs For While I’m Away is being produced by Alan Maher and John Wallace of Ireland’s newly-formed Cowtown Pictures with Peter Worsley of London-based music documentart specialists Eagle Rock Films for Globe Productions, part of Universal Music Group, with backing from Screen Ireland. Eagle Rock has international rights.

“Having been a huge Thin Lizzy fan throughout my life, it’s an incredible honour to be bringing this celebratory and intimate portrait of lead singer and songwriter Philip Lynott to the big screen,” said Reynolds.

Her recent credits include Voyager documentary The Farthest which won numerous awards including an Emmy in 2017.