StudioCanal’s Legend edges towards £10m as Disney’s Inside Out is primed to become the second highest grossing original animation of all time. 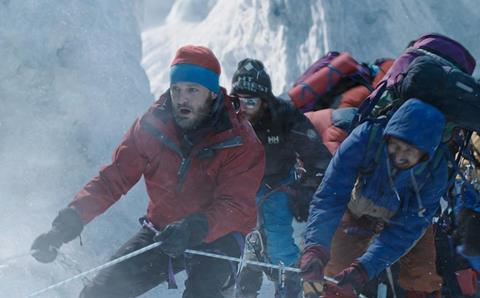 Boosted by a week of IMAX and PLF (Premium Large Format) previews, Everest reached the summit of the UK box office.

Everest stands a great chance of repeating at the top of the chart this coming weekend, before The Martian comes into orbit on Sept 30.

That lifted Legend to $15.5m (£9.96m) and there’s every chance that its final weekend results could already have pushed it past the £10m mark.

Falling a respectable 35% (excluding previews), Maze Runner: The Scorch Trials unlocked a further $2.3m (£1.5m) as it dropped to third.

Inside Out will shortly become the second highest grossing original animation of all time at the UK box office.

That’s ahead of $233,000 (£149,796) debut of director Ken Kwapis’ previous UK release, Big Miracle, from 269 sites, and A Walk in the Woods will hope its older-skewing audience can lead to solid midweek returns.

It’s unlikely to prosper midweek, so will hope for a solid hold this coming weekend to have any chance of a longer run.

Of its opening sites, four showed the film just once over the weekend while the preview figures came from four screenings across two sites.

This week sees saturation releases for eOne’s Miss You Already and Entertainment’s Solace.