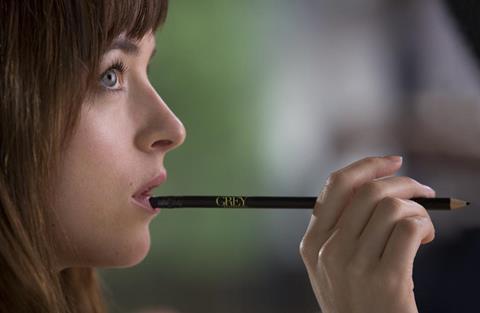 The hotly anticipated book adaptation scored a whopping $35,400 (£23,000) screen average from around 580 sites, accounting for 58% of the total market-share.

The film’s weekend total is the biggest ever for an 18-certificate (Hannibal previously debuted on $9.8m/£6.4m), the largest for a non-franchise/sequel opening, the biggest February and Valentine’s Day debut and the biggest debut of 2015.

The film was also the biggest-ever opening for distributor Universal, beating out the company’s previous record held by Despicable Me 2.

Ticket pre-sales were through-the-roof for the buzzed-about drama, in which Dakota Johnson and Jamie Dornan star as student Anastasia Steele and the handsome but tormented billionaire Christian Grey, respectively.

Vue ticket sales surpassed the $1.5m (£1m) mark 10 days prior to the film’s release and sold at the highest-ever rate for the company.

According to the exhibitor, 80% of tickets were bought by women with an average of three tickets being bought per sale.

The film now looks set to surpass the UK’s highest-grossing 18-rated film of all time, The Wolf Of Wall Street, which took $35m (£22.7m); and David Fincher’s Gone Girl, another hit novel-turned-certificate-18, which has taken $34.5m (£22.4m) (and is still slowly ticking away).

Few were willing to take on Fifty Shades this weekend but fellow-openers did include the film version of eOne’s own mega franchise Peppa Pig: The Golden Boots, which arrived sixth in the UK, taking $1m (£660,000) from 370 screens.

The family animation, which only runs 55 minutes, is something of an experiment for the distributor, which charged a lower ticket price and played almost entirely in the mornings.