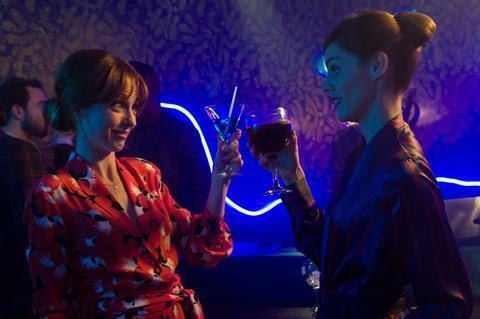 Get Her… If You Can

Guido Rud’s Buenos Aires-based FilmSharks has struck key US and German deals on two titles on its EFM slate.

HBO Latino has picked up US pay-TV and SVOD rights to the rom-com thriller Get Her… If You Can (pictured), which receives its market premiere screening at EFM today (10).

Ines de León directed from a screenplay by Pablo Alén and Breixo Corral. The story centres on a struggling comedian and two pompous shipping heirs who encounter a shaman from the Amazon interior, a maritime captain, and two actors. Leticia Dolera from Rec [3]: Genesis stars alongside Javier Rey and Amaia Salamanca.

Santiago Segura from the hit comedy franchise Torrente and his Bowfinger International Pictures partner Maria Luisa Gutierrez produced the feature, which A Contracorriente will release wide in Spain on March 29. FilmSharks and Bowfinger worked together on comedy Almost Legends and Empowered.

The company is also selling remake rights on the project. AV Jet has pre-bought Taiwan, and Australia, Central America, South America, China, South Korea and France are under discussion for distribution and remake rights.