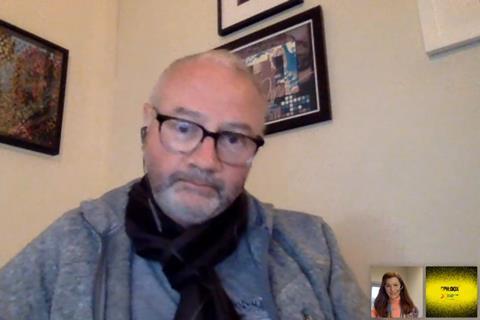 A leading figure from the International Documentary Association (IDA) has warned that the “fragile ecosystem” that funds non-fiction films has been spotlighted by the coronavirus pandemic.

Speaking during the virtual CPH:Conference, IDA executive director Simon Kilmurry discussed the crucial funds provided to documentaries at the early stages of production by philanthropic and non-profit cultural institutions.

“We’re seeing what a fragile ecosystem that [non-profit funding] really is for filmmakers,” he said. “We’re in conversation with a lot of organisations to see how they’re dealing with this… and we’re trying to share information on how to survive in the immediate crisis and how we can build a better system coming out of this.”

Based in Los Angeles, IDA is a non-profit that promotes documentary filmmakers and has around 2,000 members in more than 50 countries. Through its Enterprise Documentary Fund, it allocates $1m of development and production grants annually.

Asked how non-fiction filmmaking could cope be without philanthropic funding, Kilmurry said: “In the US ecosystem, it’s absolutely essential. Without that philanthropic start up and production money, many films couldn’t be made.

“That also highlights a problem because they’re so heavily dependent on that and we’re now seeing how fragile it is. I think this moment will cause some re-evaluation to build a stronger system.”

Norway’s Fritt Ord Foundation, which is dedicated to protecting and promoting freedom of expression, stepped in to support their country’s documentary maker when the pandemic struck.

“When the crisis happened, for us it was important to react immediately so after a few days we launched a programme to help freelancers… so they can continue with their projects, create new projects and experiment with outreach and distribution,” said Bente Roalsvig, deputy director at the foundation.

“We expect around 1,000 applications from filmmakers who want to start a new project due to the crisis. It’s for filmmakers and production companies who already are in production but need to change the order of things. It’s also funds for experimenting with new distribution forms on the internet, for example.”

The Fritt Ord Foundation granted funds to 10 documentaries that had been selected for this year’s CPH:DOX festival including Anders Hammer’s Hong Kong protests film Do Not Split; Tonje Hessen Schei’s examination of AI, iHuman; and Ala’A Mohen’s Syrian refugee doc A New Beginning.

The panel also included Los Angeles-based Hajnal Molnar-Szakacs, director of the documentary film programme at the Sundance Institute, who pre-taped her comments due to the time difference.

“I think the role of non-fiction storytellers in times of crisis and upheaval has always been incredibly important,” she said. “Whether they’ve been documenting the civil rights movement, Arab Spring, the recent Hong Kong protests or now the Covid pandemic, the role of the responsibility felt by non-fiction storytellers to document in long-form what they’re witnessing or what they bear witness has just increased.”

With the widespread closure of cinemas and postponement of festivals, Molnar-Szakacs said getting these films seen would be more challenging than ever.

“It has always been a volatile and uncertain distribution landscape but now there’s just no many more unknowns,” she explained. “It’s the filmmakers that are going to be bearing the brunt and… carrying this increased financial risk.

“The role and relevance of artists and their desire to tell long-form stories is as vital as ever. As our sources of information narrows and as nations close in upon themselves, it’s the stories and the artists who are behind these stories who will connect and inform us and allow us to build and imagine a better future.”

Making Media Matter When the World is On Fire was the title of day four of the five-day CPH:Conference, which CPH:DOX runs in partnership with Documentary Campus, with support from Creative Europe/MEDIA and Danish broadcasting union ubod.

The digital conference was launched when plans for the event had to be called off due to the coronavirus pandemic. It was streamed live on Facebook and continues today. The sessions will also be archived at https://www.cphdox.dk/.