Universal’s The Secret Life Of Pets becomes the biggest animation of 2016 to date. 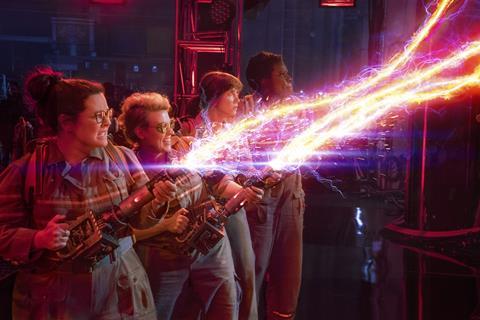 UK audiences ain’t afraid of no all-female reboot. Doing what it couldn’t in North America, Ghostbusters has topped the UK box office on debut.

Ghostbusters’ second weekend will give an indication as to whether it’ll play like a sequel and be a fast-burner, or if it could enjoy a longer word-of-mouth propelled run.

In terms of Fri-Sun tallies though, its the lowest of the series, behind Ice Age’s $2.51m (£1.9m). Collision Course will hope to rebound as schools go on holiday nationwide, otherwise there’s a real danger it won’t match Ice Age’s $20m (£15.09m) result.

The Secret Life Of Pets may have dropped to third, but it remained the leading animation over Fri-Sun.

Universal’s hit animation hopped to a further $2.71m (£2.05m) for a terrific $34m (£25.74m) after four weeks in play. As expected, it is now the highest-grossing animation of the year, topping Zootropolis.

Finding Dory swims into UK cinemas on July 29 which will impact Life Of Pets, but the latter could already be on the cusp of £30m by then given that schools are soon to break up.

Warner Bros’ reboot is up to $8.8m (£6.65m) after ten days in play and if it posts a sturdy hold this coming weekend, it could stand an outside chance of hitting £10m.

Secret Cinema’s big summer production of Lionsgate’s Dirty Dancing had the time of its life with a stonking $1.25m (£946,086) taking over its first three days.

In a limited run, Dirty Dancing holds its final dates this coming weekend.

As expected after the relatively soft opening, the sequel is unlikely to match Now You See Me’s $13.9m (£10.5m) result.

This week sees saturation releases for eOne’s The BFG and Paramount’s Star Trek Beyond.

Studiocanal’s Chevalier and Soda Pictures’ Ming Of Harlem: Twenty One Storeys In The Air are among the films set to receive a limited release.