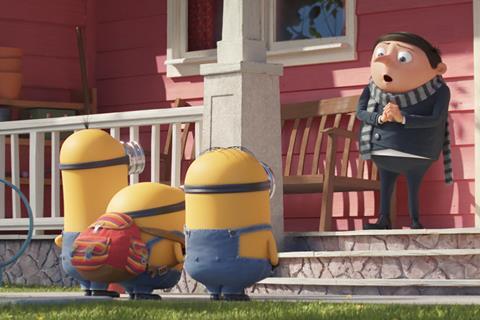 Minions: The Rise Of Gru’ returns to global top spot

UPDATED: Now in its fourth weekend of play in most markets, Universal’s Minions: The Rise Of Gru has returned to the top spot of the global box office – elbowing aside Thor: Love And Thunder after its two-week reign at the chart summit.

The start of the school holiday in many markets saw this fifth film in Illumination Entertainment’s Despicable Me/Minions franchise drop just 25% overall across international territories. In North America, the fall was an estimated 34%.

The film was boosted by its arrival in both South Korea ($6.3m in five days – the biggest animation opening of the pandemic era, and ahead of the first Minions’ debut) and Taiwan ($1.7m).

Among holdover markets, UK/Ireland – where the summer holiday began for most schools last week – excelled with a confirmed 17% rise, delivering $3.7m, and taking the total to $33.7m. UK/Ireland has now overtaken Mexico ($32.4m) to become the top international territory on the film.

Argentina, where the school holiday began two weekends ago, has seen its second successive week-on-week rise – up another estimated 23% for the latest session. Cumulative total there is $15.8m, ahead of more populous neighbour Brazil on $15.2m.

Also for Universal, Jurassic World Dominion added a confirmed $10.2m worldwide, pushing the total to $920.9m. Dominion is now the biggest film of 2022 in both Argentina and Mexico.

Universal/Blumhouse’s The Black Phone added $10.3m, pushing the global total to $130.1m. The film was boosted by arrival in Australia ($1.5m) and Brazil ($1.3m including extensive previews). Mexico remains the top international market in terms of cumulative totals – way out in front with $14.4m.

‘Where The Crawdads Sing’ scores $4m in early international markets

UPDATED: Sony Pictures International has scored a confirmed $4.1m with Where The Crawdads Sing in its first three international markets: UK/Ireland, Australia and New Zealand. The adaptation of the Delia Owens bestseller grossed $2.1m including previews in Australia, ahead of UK/Ireland ($1.7m) and New Zealand ($297,000).

The staggered international rollout for Crawdads sees it land in France and Germany in mid-August, in Brazil and Mexico in early September, Spain in late September, and Italy and South Korea in October. 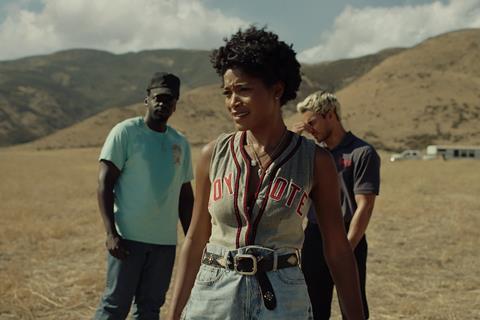 ‘Nope’ delivers biggest debut for original screenplay since ‘Us’

UPDATE: In North America, Universal’s release of Jordan Peele’s Nope has delivered the biggest box office debut for an original screenplay since the opening of Peele’s own Us. Nope’s confirmed $44.4m chart-topping debut is bigger than achieved by Quentin Tarantino’s Once Upon A Time… In Hollywood ($41.1m). Us debuted with $71.1m in March 2019.

‘Thor: Love And Thunder’ closes in on $600m worldwide

Disney/Marvel’s Thor: Love And Thunder continued its box office slide with its third weekend of play – declining an estimated 49% in international holdover markets and 53% in North America. These burn rates are par for the course with Marvel titles.

Worldwide weekend box office was an estimated $53.9m – slipping to second place in the chart behind a buoyant Minions: The Rise Of Gru. Worldwide total is now nudging $600m – with $598.2m so far.

Despite not opening yet in China or Russia, Love And Thunder has surged past the $449m global total of the first Thor film (2011), and is closing in on the $645m total achieved by Thor: The Dark World (2013). This fourth Thor film still has some way to go to catch the $854m tally achieved in 2017 by Thor: Ragnarok.

The latest weekend saw Top Gun: Maverick added another estimated $26.4m, placing it fourth in the worldwide weekend chart in its ninth week of release.

UPDATE: Warner Bros’ Elvis added another estimated $13m at the weekend, taking the global total through the $200m barrier, and to $212.7m, of which $94m comes from international markets. For international markets, the drop was a mere 18%, the same drop in Latin America where Baz Luhrmann’s film is only in its second week of release.

In cumulative totals, English-speaking markets UK/Ireland ($22.5m) and Australia ($18.7m) are way out in front among the international territories with Elvis. Next-biggest markets France ($6.9m), Germany ($4.2m) and Japan ($4m) are far behind.