There were wins for The Night Manager cast and The Crown. 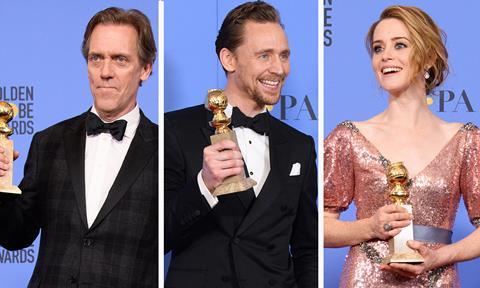 British actors had a great night at the 2017 Golden Globe Awards in the TV categories.

His co-star Olivia Colman beat Game Of Thrones star Lena Headey and Westworld’s Thandie Newton to win in her category, though she was not at the ceremony to collect the award.

“Thank you to the HFPA for this amazing honour” he said.

“I suppose made more amazing by the fact that I’ll be able to say I won this at the last ever Golden Globes. I don’t mean to be gloomy. It’s just that it has ‘Hollywood’, ‘foreign’ and ‘press’ in the title.”

The John le Carre adaption was also nominated for best mini-series or TV movie, but lost out to The People vs. OJ Simpson.

The Crown also won the hotly contested best TV drama award, defeating Game Of Thrones, Stranger Things, This Is Us and Westworld.

In the film categories, British actor Aaron Taylor-Johnson was a surprise best supporting actor winner for Nocturnal Animals. Mahershala Ali from Moonlight had been regarded as the frontrunner.

In his speech, he said to his wife Sam Taylor-Johnson: “Thank you for putting up with me.  I was not very pleasant in this role.”