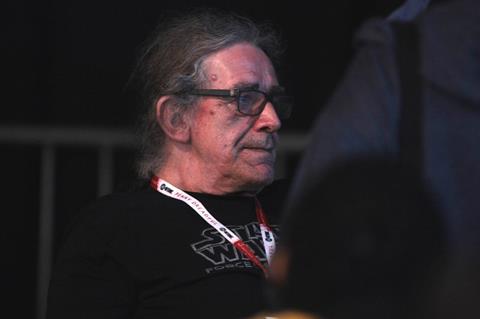 Harrison Ford has paid tribute to Peter Mayhew, the British-born actor who famously played Chewbacca in the Star Wars films, and who died on April 30 at his home in north Texas. He was 74.

Mayhew played the hirsute, outsized Wookiee sidekick to Ford’s Han Solo in the original trilogy, and reprised his role in Episode III – Revenge Of The Sith in 2005, and finally ten years later in The Force Awakens, which remains the highest grossing film of all time in North America on $936.7m. Joonas Suotamo replaced him in the role.

In a statement to the press, Ford said, “Peter Mayhew was a kind and gentle man, possessed of great dignity and noble character. These aspects of his own personality, plus his wit and grace, he brought to Chewbacca. We were partners in film and friends in life for over 30 years and I loved him. He invested his soul in the character and brought great pleasure to the Star Wars audience.

“Chewbacca was an important part of the success of the films we made together. He knew how important the fans of the franchise were to its continued success and he was devoted to them. I and millions of others will never forget Peter and what he gave us all. My thoughts are with his dear wife Angie and his children. Rest easy, my dear friend…”

Mark Hamill, who played Luke Skywalker alongside Mayhew in the first trilogy, tweeted: “He was the gentlest of giants-A big man with an even bigger heart who never failed to make me smile & a loyal friend who I loved dearly-I’m grateful for the memories we shared & I’m a better man for just having known him. Thanks Pete.”

“RIP Peter Mayhew,” tweeted Rian Johnson, who directed Star Wars: The Last Jedi, in which Mayhew did not appear. “To create a beloved character with warmth and humor is a testament to any actor’s spirit. To do it under a half ton of yak hair takes a true legend.”

Lucasfilm president Kathleen Kennedy wrote: “We are deeply saddened today by the news of Peter Mayhew’s passing. Since 1976, Peter’s iconic portrayal of the loyal, lovable Chewbacca has been absolutely integral to the character’s success, and to the Star Wars saga itself.”

”The @WaltDisneyCo mourns the loss of our beloved #chewbacca portrayer, #PeterMayhew. Peter was larger than life in so many ways…a gentle giant playing a gentle giant. Rest in peace,” wrote The Walt Disney Company chairman and CEO Bob Iger.

Mayhew’s family announced his death on Twitter on Thursday and said, “He put his heart and soul into the role of Chewbacca and it showed in every frame of the films from his knock kneed running, firing his bowcaster from the hip, his bright blue eyes, down to each subtle movement of his head and mouth. But, to him, the Star Wars family meant so much more to him than a role in a film.

“The relationships that began then grew into the friends and family that he would love for decades to come. As the films released and became more well-known he had his eyes opened to the possibilities of what he could achieve with his role in the Star Wars universe. For more than 30 years Peter traveled all over the world spending time with his fans and friends. Peter developed lifelong friendships with the other cast members and his fans while on the convention circuit touching the lives of millions. As he realized over the years the impact he could have, he became heavily involved with the 501st legion, Wounded Warriors, Make-a-Wish, and other non-profit organizations.”

The 7 ft 2in Mayhew was working as a hospital orderly at a London hospital when he was spotted and landed his first film role as a minotaur in Sinbad And The Eye Of The Tiger. Shortly after, George Lucas hired to him to play Chewbacca when David Prowse declined the role in favour of playing Darth Vader.

Mayhew established the Peter Mayhew Foundation to support people in crisis, and the body provided help to Venezuelan children during that South American country’s ongoing political and humanitarian emergency.

He is survived by his wife Angie and their three children.