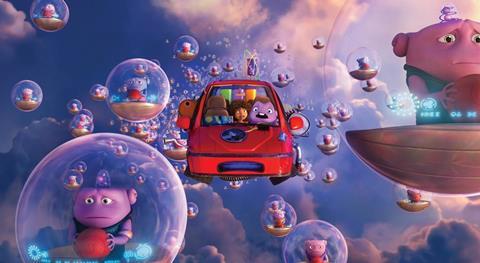 Home will hope to fend off family competition this weekend with the arrival of the SpongeBob sequel, and will look to prosper over the upcoming Easter school holidays to push it towards the £20m mark in the UK.

It may have missed out on the top spot, but The Divergent Series: Insurgent is off to an excellent start in the UK.

Divergent went on to take $9.8m (£6.6m) in the UK, and Insurgent is well-set to challenge both that and potentially the £10m mark.

Ahead of its release this Friday [March 27], Paramount’s The SpongeBob Movie: Sponge Out of Water banked $1m (£680,000) from its 481 sites during previews on Saturday and Sunday.

The SpongeBob SquarePants Movie posted a $1.9m (£1.25m) opening in 2005 from 440 sites without previews, and the sequel is now all-but guaranteed to surpass that.

Xavier Dolan’s critically acclaimed Mommy enjoyed a $86,100 (£57,761) UK debut, including previews, from its 24 sites through Metrodome. It marks Dolan’s best-ever opening, but it’s also worth noting that it received the widest opening too.

This week sees saturation releases for Paramount’s The SpongeBob Movie: Sponge Out of Water, Disney’s Cinderella and Warner Bros’ Get Hard.

Universal’s Seventh Son and Soda Pictures’ The Face of an Angel both receive a wide release, while Curzon Film World’s Wild Tales and Dogwoof’s Dior and I are among the films receiving a limited release.