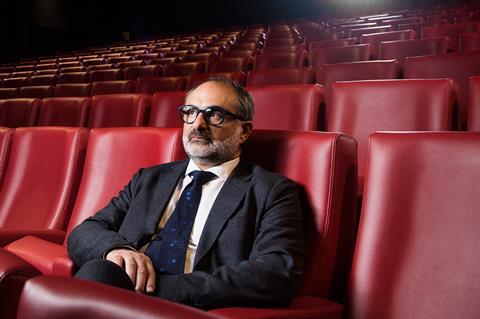 Respected programmer and selector Giona Nazzaro was announced as the new artistic director of the Locarno Film Festival on Thursday (November 5).

He arrives at the 73-year-old lakeside festival from the International Film Critics’ Week at the Venice Film Festival. He put his stamp on the parallel selection as delegate general from 2016, showcasing an eclectic selection of films ranging from UK actress-director Alice Lowe’s dark comedy Prevenge to Tunisian filmmaker Alaeddine Slim’s The Last Of Us, which won the Lion of the Future for best debut film, Billie Piper’s Rare Beasts and buzzy Danish thriller Shorta this year.

One of the most travelled festival professionals on the circuit, multi-lingual Nazarro previously collaborated with Visions du Reel in Nyons, Turin, Rome, Festival dei Popoli in Florence and was on the selection committee for Rotterdam at the time of his Locarno hire.

Screen spoke to Nazzaro to get the lowdown on what he hopes to achieve in his new role.

You spoke fondly in the press conference of how your long-time relationship with Locarno began when you first attended the festival for the first time in 1994. What excited you about the festival?
The first time I went to Locarno, it was to see a documentary by Amos Gitai [In The Name Of The Duce] about an election taking place in Italy at the time. It was the first time I had set foot in Locarno and I was amazed by the atmosphere, which was extremely competent and cinephile as well as a great celebration too. The fact that I was able to watch Kiarostami [Through The Olive Trees] and Speed on the Piazza Grande on the same night, only added to my fascination.

I started working with the festival from around 2009, moderating its German-language press conferences [Nazzaro is Italian by nationality but was born and grew up in the Germany-speaking city of Zurich]. From there, the relationship grew organically.

What does it mean to you to take over as artistic director?
Locarno is one of the greatest festivals in the world. I myself am in awe of Locarno. It inspires respect, admiration, and obviously to be a part of this history is amazing.

What will your main goal be as artistic director?
To portray as much diversity and as much as possible to open the gates of cinema to engage in meaningful conversation with all these situations that have been going on. I don’t believe in cinema being white and heterosexual.

Cinema needs to reflect that there are so many things at stake and that the world is a way bigger place than sometimes we might think it is. Cinema and films should somehow reflect and work in a way that other voices are heard, other stories are told.

I don’t like the word ‘eclectic’. I am rather a very curious cinephile. I don’t like to be limited to my own tastes. I like being challenged by the things that I don’t know yet. This is the best way to keep yourself alert.

You’re a regular guest at film events in the Middle East and Africa. Will we be seeing more films from these regions in Locarno?
Yes, absolutely. It certainly is one of my ambitions so that Locarno keeps on doing what it has always done, championing cinema from around the world, but with even more attention and curiosity in its work.

Do you have a new selection team in place yet?
That’s a work in progress which will be announced as soon as I have the right team in place but we’re already working on that as I speak.

You have a wide breadth of experience in terms of the countries you’ve worked in and festivals you’ve collaborated with. Do you think this gives you a wider perspective as an artistic director?
I’m always looking to widen things as much as possible. This is the job. I mean, you need to keep your eyes and ears as open as possible and without trying to sound corny or cheesy, you need to keep your heart open too.

What are your expectations for the 74th edition of Locarno in August, 2021. Are you planning for a hybrid event? Will your experience in Venice this year help with planning a physical edition of Locarno?
Even if a vaccine doesn’t come along in time, it’s still possible to live cautiously with the presence of the virus. And it is still possible to buy books in bookstores, or to watch a play in a theatre or to watch a movie in a cinema. While we need the vaccine, to protect ourselves from Covid, we also need culture and art in our lives to make them better. The way culture has been put in a corner is one of the things that scares me the most.

Locarno is already working on a large-scale innovation project so a digital component is a given. Nowadays, the festivals have two key assignments. One is to imagine how they want to exist in the future. The other one is to defend the screening room, the people who work in cinema and all the economy behind a film. That’s a historical challenge that we can’t ignore. So to go back to your question, unless some major catastrophe happens, we will go live on the Piazza Grande with the competition and all the sections that we can reasonably come up with, within the wider frame of the sanitary precautions that are necessary due to the pandemic.

You also said in the press conference that you will be renting a flat in Locarno and aim to spend considerable amounts of time in the city. Is that at the festival’s request or your own choice?
I don’t want to be in Locarno only for work. I want a place where I can cook a meal, invite people back to. I also think it’s very important to help get that sense of community that we need and to keep it up because it is exactly that sense of community that is threatened by the virus now.