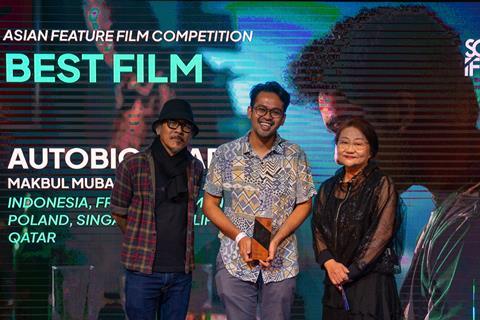 Indonesian drama Autobiography by Makbul Mubarak has won the best Asian film prize at the Singapore International Film Festival’s Silver Screen Awards while Russian director Marusya Syroechkovskaya’s documentary How To Save A Dead Friend picked up the audience award.

Autobiography premiered in Venice’s Horizons strand in September, where it scooped a Fipresci prize, and has since won further silverware at the Asia Pacific Screen Awards, Golden Horse Film Festival and Marrakech among others. The debut feature of film critic-turned-director Mubarak is about a young man who keeps house for a retired general, finding himself torn between loyalty and justice as the mayoral election approaches. Alpha Violet handles sales.

A jury that included filmmakers Lav Diaz, Kim Soyoung, Ritu Sarin and New York Film Festival artistic director Dennis Lim praised the film as “a vivid character study, a powerful allegory of national trauma, an urgent dissection of the fascist mindset and how it persists.”

A total of 14 prizes across six categories were handed out at the awards ceremony on Sunday, the closing night of the festival’s 33rd edition, which ran from November 24 to December 4.

Overseas filmmakers on hand to receive awards included Taiwan’s Laha Mebow, who took the best director prize for Gaga, and Thailand’s Sorayos Prapapan whose Arnold Is A Model Student received a special mention.

More than 8,000 tickets were issued for 82 film screenings and VR sessions during this first post-pandemic edition of SGIFF, which showcased more than 100 films from 55 countries over 11 days.

A special double-bill fundraiser was held with the screening of Singapore filmmaker Lei Yuan Bin’s R21-rated documentary Baby Queen, which was a late addition to the festival lineup, and a live drag performance by the film’s protagonist Opera Tang and her fellow drag artists.

“This year marked the full return of SGIFF. The need to showcase the diversity and richness of Asian storytelling to the world remains essential,” said the festival’s executive director, Emily J. Hoe. “It is my hope that SGIFF continues to foster a deeper appreciation for cinema in Singapore while growing awareness for stories and experiences from all over the world.”

Audience Choice Award: How to Save a Dead Friend