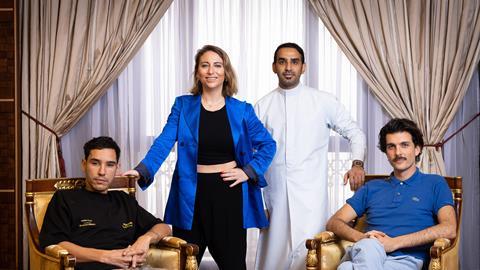 In our sixth edition of Arab Stars of Tomorrow, Screen International spotlights five emerging Middle Eastern and North African talents in the fields of acting and directing.

The showcase has been organised in cooperation with the Red Sea International Film Festival for the first time. At a launch panel held at the festival on December 4 hosted by Screen’s international news editor Michael Rosser, the stars shared details of upcoming projects and optimism for the future of Arab content.

Al Salman, whose Raven Song premiered in competition at Red Sea last week and is Saudi’s submission for the Oscar, said: “It’s a very interesting era. A lot of my colleagues are making their first feature films so I’m expecting a new record in the number of films produced in Saudi Arabia. I’ve never seen anything like it here before.

“Hopefully, we are going to see so many stories that have never been told before and different style of storytelling because of the amount of diversity and culture in this region.”

Click on the links below to read the profiles of this year’s stars.

Arab Stars of Tomorrow celebrates Arab talent and highlights the hottest up-and-coming actors, writers and directors who are primed to make their mark in the international industry. This year’s selection was jointly curated by Screen International and journalist/festival programmer Kaleem Aftab.

During the panel on Sunday, the 2022 stars shared details of upcoming projects. Bdeir, whose short Warsha won the short film jury award for international fiction at Sundance earlier this year, said: “My first feature will be called Pigeon Wars and is set in Beirut, about a young female student who discovers the underground world of pigeon wars.” A first draft of the script was finished in October and the project received a development grant from Telefilm Canada and a development prize at the Atlas Workshops in Marrakech.

Paris-based Tunisian actor Bessa, who won this year’s Cannes Un Certain Regard best performance award for his role in Harka, said he has reprised his role as soldier Yaz Kahn in a sequel to Netflix’s Chris Hemsworth-starrer Extraction, and will also next be seen in Meryam Jabour’s Motherhood. “I’m very proud of this film,” he said of Motherhood, which is at editing stage. “Meryam is an outstanding director and I think one of the big Arab stars of tomorrow, for sure.”

Fellow actor Jallad, who starred in Wissam Charaf’s Venice Days award-winner Dirty Difficult Dangerous, will next be seen in Caroline Vignal’s Iris Et Les Hommes and is looking for fresh opportunities. “I like comedies, I like dramas, I like roles that resonate with me and move me,” he said. “I’m not really preoccupied with what’s going to happen next. The right opportunity will come at the right time.”

Just days after the premiere of Raven Song, Al Salman is now at the early stages of a second feature, but not yet ready to share too many details. “For my second feature, I’m planning to write a film set in my hometown about an old man,” he said. “I’ve not quite finished the treatment yet so I cannot share much but finding time to write is quite challenging at this busy time.”

Moroccan writer/director Alaoui, whose short So What If The Goats Die won the grand jury prize at Sundance in 2020 and a César award, was unable to attend the festival.

Mohammed Al Turki, CEO of Red Sea International Film Festival, said: “We’re thrilled to showcase these five incredible young Arab talents at the Red Sea IFF, and host this initiative in partnership with Screen. These young stars speak for our region with an authentic voice that represents the forward-looking hopes of their generation and the wave of creativity on display in our Arab film industry. We are honoured to shine a light on them at this burgeoning stage of their careers and cannot wait to see what the future holds for them.”