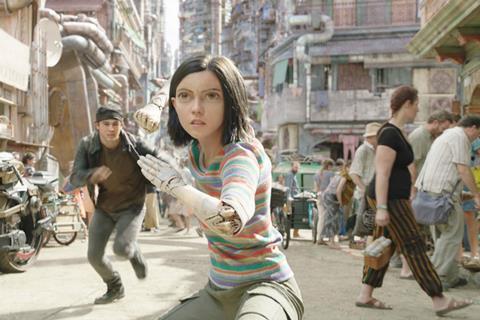 James Cameron-produced sci-fi action outing Alita: Battle Angel will be trying to defeat the Hollywood opposition at the international box office this weekend as it expands into 74 new markets. It will face competition from horror sequel Happy Death Day 2U, making its international debut in 44 markets.

Fox International’s Alita, which also opens this weekend in North America, had taken $35.6m internationally as of Tuesday (February 12) after its launch last weekend in 11 markets. This week, the big budget manga-based tale directed by Robert Rodriguez opened in France on Wednesday (February 13), landed in Australia, Brazil, Germany, Mexico and Russia on Thursday (February 14) and hits Spain on Friday (February 15). Openings in China and Japan are set for next weekend.

Happy Death Day 2U, from Universal Pictures International, makes its international start – also simultaneous with its North American launch - in several of the same territories, having opened in France on Wednesday, Australia, Germany, Korea and the UK on Thursday and with Spain to come on Friday.

The Blumhouse-produced comic slasher sequel hits the marketplace 18 months after the original Happy Death Day, which grossed an impressive $69.8m internationally to add to its $55.7m domestic haul.

Other US films have only scattered new international openings this weekend.

Major Oscar contender The Favourite, which has so far amassed $40.8m through Fox International, arrives in Japan on Friday. Can You Ever Forgive Me?, also from Fox, reached Brazil on Thursday and the studio’s The Kid Who Would Be King, with $5.8m from international so far, opens in the UK on Friday.

The Lego Movie 2: The Second Part, from Warner Bros Pictures International, opened in Mexico on Thursday, and the studio’s The Mule in Brazil on the same day.

Fox reported that Mary Queen Of Scots is now at $22.3m internationally and How To Train Your Dragon: The Hidden World at $150.6m.