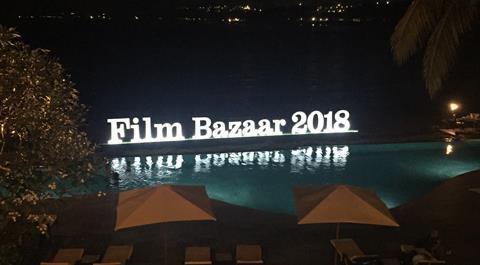 Saurav Rai’s Invitation and Jadab Mahanta’s The Holy Bride were both presented with Prasad Post-Production & Moviebuff Appreciation Awards in the Works-in-Progress Lab at this year’s edition of Film Bazaar.

Invitation (Nimtoh), a Nepalese-language drama, tells the story of a ten-year-old village boy who upsets his grandmother by trying to get invited to a wedding within a wealthy family. Assamese-language The Holy Bride (Rukuni Koina) revolves around a girl who suffers social stigma due to a disease that prevents her from entering puberty.

Meanwhile the Facebook Award for a WIP Lab project went to Prateek Vats’ Eeb Allay Ooo!, a Hindi satire about a man who has to keep Delhi’s monkey population away from government offices. Facebook’s award in the Film Bazaar Recommends section went to Assamese-language drama Ravening (Aamis), directed by Bhaskar Hazarika, about an affair between a student and a married doctor.

Prasad and Qube Cinema’s Moviebuff also presented an award to a project in Film Bazaar Recommends: Kislay’s Hindi-language Strange Old Lady (Ajeeb Budhee Aurat), about a woman who refuses to behave like a widow when her husband dies.

While the market was busy, international participation was muted compared to previous years, reflecting the on-going political problems at organising body, the National Film Development Corporation (NFDC), and the fact that invitations were sent out relatively late.

The organisation has been without a managing director since the firing of Nina Lath Gupta in March 2018. While Gupta was cleared of all accusations of wrongdoing by the Indian government over the summer, she still has not been reinstated in her role.

India’s Film Facilitation Office (FFO), which is managed by the NFDC, also used Film Bazaar as a platform to launch its new web portal, www.ffo.gov.in, and held a two-day workshop to discuss filming in India.

Lauched in 2015, the FFO has spent the past few years streamling shooting permissions and visa clearance for film, TV and web series production. It has so far assisted around 75 international projects to shoot in India including Danish film Iqbal & The Jewel Of India, US production Hotel Mumbai and France’s The Extraordinary Journey Of The Fakir.

Attending Film Bazaar for the workshop, Ashok Parmar, joint, secretary, films at the Information & Broadcasting Ministry, said India’s central government is drafting legislation on tax incentives, with further details to be announced at Cannes next year.