'It feels like a gift from my homeland': 2018 Bafta nominees react 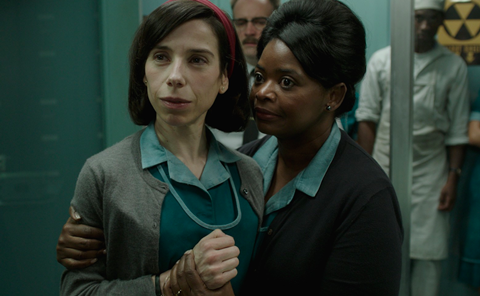 Sally Hawkins (actress): “I am incredibly humbled by such a nomination. It is very special to be honoured by Bafta. It feels like a gift from my homeland and I am very touched by it. Thank you dear Bafta. This film, the story, its characters and the great people that were involved in bringing it to the world are unique and very precious to me. I believe this is an important film and it is a deep, deep part of my heart. So to be honoured and recognised in such a way… well, yes it is a gift. Guillermo is a master and visionary. I am very lucky. Thank you with all my heart.”

Guillermo Del Toro (director): “I am absolutely elated with the Bafta nominations. This is a season in which you hope for the best and the Baftas have a stature and a place in the community and conversation that stands unique and tall. To recognise a movie as personal and as difficult to execute as The Shape of Water is incredibly encouraging for me as a storyteller.”

J. Miles Dale (producer): “Guillermo and I are so thrilled at the widespread recognition that Bafta has given to The Shape Of Water with our twelve nominations. We are very proud of the accomplishments of our incredibly talented creative team of actors and artists, and are honoured that the Academy members have chosen to shine a light on their wonderful work.”

Gary Oldman (actor): ”This is my third Bafta nomination as an actor; the recognition means so much, and especially more so not merely for the distinguished company I now find myself in with my fellow nominees, but most especially for the privilege of playing Winston Churchill, which it truly was.”

Kristin Scott Thomas (actress): ”I am thrilled to be a nominee and incredibly thankful to Bafta in recognising my role as Clementine Churchill; shining a little extra light on a remarkable woman too frequently hidden behind her husband, Winston.  It is also an honour to be recognised this year among such dazzling performances from supporting actresses.”

Emma Thomas (producer): ”Dunkirk was a passion project for us 20 years in the making, and we feel enormously grateful just to have been given the opportunity to make it. The incredible response of audiences to the film both in the UK and worldwide has been massively gratifying to us, and this honour from Bafta is the icing on the cake.”

Director of Film4 Daniel Battsek: “We’re absolutely thrilled Martin McDonagh’s Three Billboards has been recognised by Bafta and its members with nine nominations – and following such a successful weekend at the Golden Globes! Film4 has a long history with Martin having backed all his films to date, helping this important British-Irish writer to achieve the worldwide critical acclaim he deserves. And we’re also delighted both Rungano Nyoni’s directorial debut I Am Not A Witch and Aneil Karia and Scott O’Donnell’s short film Work have been acknowledged today.

“These nominations illustrate the vital role Film4 plays to incubate home-grown talent and promote their work to a global audience.”

Graham Broadbent (producer): ”This is our third film with Martin who’s an extraordinary talent. We couldn’t be happier that people are enjoying Three Billboards Outside Ebbing, Missouri around the world. We’ve had wonderful recognition internationally at Festivals and Awards ceremonies, but there’s nothing nicer than having our film gain recognition at home. Thank you to Bafta.”

Saoirse Ronan (actress): “I’m incredibly grateful that Lady Bird has been recognized by Bafta. I was inspired by this amazing character that Greta created, a young woman who believes so much in herself, and it’s been amazing to see how so many are connecting with this story as well.”

Greta Gerwig (writer-director): ”Thank you so much for this amazing honour! Everyone who worked on Lady Bird poured their heart and soul into it, and I am so proud of every single cast and crew member. I am thrilled for Saoirse Ronan and Laurie Metcalf – they are both such extraordinary actresses, and they are deserving of every accolade. I’ve always wanted to be a writer and director, and I could not be more happy that I’ve been able to do it and that it has been received with such love.”

William Oldroyd (director), Alice Birch (writer), Fodhla Cronin O’Reilly (producer): ”We’re so delighted to have been recognised by Bafta for our debut film. It’s a huge honour felt by the whole team. We’re immensely proud of our film and how genuinely collaborative the experience of making it was. We were only able to work in this way because of the incredible support and encouragement of iFeatures, Creative England, BFI, BBC Films and Great Point.”

Andrey Zvyagintsev (director, co-writer) and Alexander Rodnyansky (producer): ” We always felt that Loveless, although set in Russia, is a truly universal story that reflects the general state of the world and societies in all countries. We are deeply honoured by this nomination and we are both very grateful to the British Academy of Film and Television Arts for recognizing our film.”

I Am Not Your Negro

Raoul Peck (director): “I’m grateful to be nominated at the Bafta with I Am Not Your Negro. On behalf of our partners and team, I would like to thank the British Academy Film Awards for this incredibly humbling nomination. After the film’s critical and public success in the US and throughout the world, I’m glad it found such an inspiring echo in the UK. Thank you.”