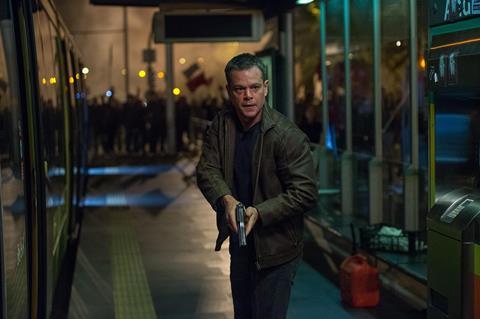 The action release was forecast to become the biggest international performer of the franchise on Monday, when it is expected to overtake The Bourne Ultimatum’s $216m. The worldwide tally stands at $347m.

The final four releases are set for Greece, Italy and Russia this week and Japan on October 7.

Illumination Entertainment’s The Secret Life Of Pets hopped to a further $24.9m from 57 territories for $371.6m and $724.9m worldwide.

The family smash enjoyed the biggest August opening weekend for an original animation in Brazil on $4.4m and also scored number one debuts in Indonesia on $1.1m and the Philippines on $1m.

There are seven territories to go including Singapore this week and Australia and Malaysia on September 8.

The horror film held well in Mexico on $904k for a ten-day tally of $3m. A pair of franchise-best debuts in Colombia and Chile resulted in $215k and $111k, respectively. Election Year arrives in Germany on September 15 and Brazil on October 6.

Laika Entertainment’s Kubo And The Two Strings has amassed an early $2.7m from its 15 territories and opened in Spain on $368k and Peru on $155k.

The animated sequel posted the biggest opening weekend for a non-local animation in China on $42.5m and a chart-topping $4.5m debut in Italy.

Cuerpo de Elite debuted in Spain on $1.4m from 370 sites and Mechanic: Resurrection opened day-and-date with North America in the high-piracy market of Russia on $1.4m from 1,054.

The DC Entertainment adaptation retained the top spot in Germany with a $2.4m second weekend for $11.2m and added $1.5m in Italy for $10.7m after three weeks.

The final release comes in Japan on September 10.

Lights Out scared up $9.9m from 55 territories for $60.5m following a strong $3.9m debut in South Korea to chart second behind local film The Tunnel.

Paramount-MGM’s remake posted holdovers of $1.4m for $4.4m and $1.1m for $4.9m in Brazil and Mexico, respectively, as Australia delivered the biggest debut of the weekend with $789k from 226 cinemas to chart fourth.

Star Trek Beyond phased to $4.7m from its 51 markets for $92.1m after opening in four new markets.

South Korea added $1.6m for a local tally of $8.1m and France recorded a $1.1m second weekend for $4m to date. It opens in Brazil and China next weekend.

Teenage Mutant Ninja Turtles: Out Of The Shadows opened in its final market of Japan on a $1.6m debut from 307 sites, and now stands at an international tally of $160.5m.

The R-rated comedy was the best new opener in the UK on $1.9m from 464 venues to chart third, while it stayed top in Australia on $1.5m in the third weekend for $8.3m.

Bad Moms arrived at number five in Mexico on $853k and debuted at number one in New Zealand on $402k.

It is scheduled to open Russia this week, followed by Germany on September 22 and Italy on October 6.

According to Sunday estimates, the Pixar animation posted chart-tipping bows of $1.4m, $600k and $400k in Sweden, Norway and Denmark, respectively, while it retained the top spot in the UK as it reached a local tally of $46.8m. Japan remains the lead market on $62.2m ahead of openings in Greece and Turkey this week.

Landing in Germany on $300k, Pete’s Dragon flew to $2.9m from its 23 territories for $21.9m. It opens this week in Malaysia, Singapore, Uruguay and Paraguay.

UPDATE: Surfacing in 12 new markets, The Shallows bit into a further estimated $5.8m from its 71 territories for $38.5m.

Its best debut came in Italy with $882k from 264 screens, followed by preview-boosted debuts of $660k and $563k in Brazil and Germany, respectively. France added $825k in the second weekend for $2.8m.

Creeping into seven markets day-and-date with North America, Don’t Breathe recorded a $1.9m international debut. Almost half of that came from a $931k bow in Russia from 1,014 screens. The horror opens in Australia and Spain this week.

Sausage Party stands at an early $8.7m from its 16 markets with a release in the UK to come this week.

From its three territories, Showbox’s The Tunnel travelled to an estimated $5.7m for $44.5m to date, according to ComScore.

It opens in Australia, Mexico and Norway next weekend, with releases in Germany (Sept 8), Russia (Sept 15), Netherlands (Sept 22) and Belgium (Oct 5) still to come.

UPDATE: Now You See Me 2 grossed $2.1m from 55 markets or $258.9m. The mystery sequel arrived in Germany on $768k including previews and ventures into its last markets of Japan and Germany-speaking Switzerland this week.