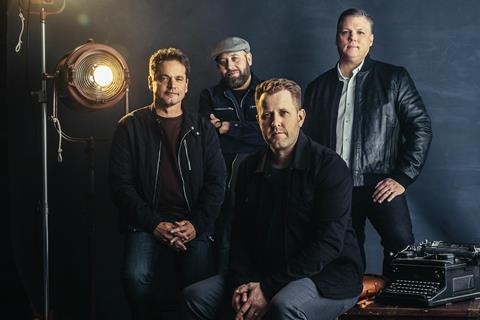 Kingdom Studios, whose faith-based family release I can Only Imagine was a box office hit last year, unveiled a slate of projects on Wednesday (27) that will go through the company’s partnership with Lionsgate, including a biopic about Christian rock star Jeremy Camp.

Kingdom Studios co-founders and directors Jon Erwin and Andrew Erwin announced the roster at the National Religious Broadcasters convention in Anaheim, California, adding that they planned to make two theatrical event movies for the faith audience each year.

First to go will be the previously announced I Still Believe, the biopic of Christian rock star Jeremy Camp, on March 20. The Erwin brothers directed from a screenplay by Jon Erwin and Jon Gunn (who directed The Case For Christ). Kingdom Studio co-founder and producer Kevin Downes produces.

The pipeline includes Jesus Revolution, about a national spiritual awakening in the early 1970’s and its origins in a southern California community of teenage hippies. Downes and the Erwin Brothers will produce in association with pastor Greg Laurie. Gunn will direct from a screenplay he co-wrote with Jon Erwin.

Downes unveiled a trilogy of films inspired by the Bible designed to create a cinematic universe of biblical stories. “The best-selling book of all time is the perfect source material for the most gripping character-driven cinematic universe ever undertaken,” said Downes. The first film in the trilogy will be Apostles: Resurrection Of Christ, which Downes will produce and the Erwin brothers will direct from a screenplay by Jon Erwin and Gunn.

Development title The Drummer Boy also got a mention. The period musical is being developed in association with faith-based musical group for King & Country. The Smallbone Brothers will direct from a script they are co-writing with Richard Ramsey, and Downes and the Erwin brothers are producing, with Luke Smallbone on board as executive producer.

Last August Lionsgate and Kingdom Studios, which is based in Los Angeles and Nashville, announced a film and television first-look pact with Andrew and Jon Erwin and producing partner Downes. Roadside Attractions released I can Only Imagine and it grossed $83.5m in North America.

“The dream of Kingdom Studios is simple: to create a media company dedicated to telling life-changing stories by empowering incredible artists and creatives,” said Jon Erwin. “We are excited to partner with global content leader Lionsgate to make that dream a reality,” said Downes.

“Lionsgate is built on the very idea of delivering all audiences stories that inspire, uplift and entertain,” said Lionsgate motion picture group chairman Joe Drake. “The films that Kingdom has unveiled today add an exciting new dimension to our already existing commitment and relationship within the faith community… Jon, Andrew, and Kevin are filmmakers who are completely dedicated to their craft and have established a strong relationship with an audience by consistently delivering high quality films and doing it with an intimacy that is very special to witness.”