‘Jojo Rabbit’, ‘A Beautiful Day In The Neighborhood’, ‘Radioactive’ among world premieres at Toronto 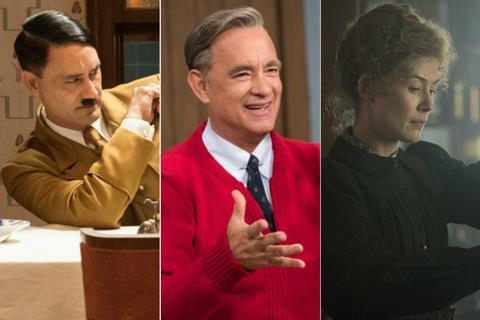 ‘Jojo Rabbit’, ‘A Beautiful Day In The Neighborhood’, ‘Radioactive’

TIFF co-heads Cameron Bailey and Joana Vicente announced selections from Galas and Special Presentations today (July 23). Satrapi’s drama Radioactive starring Rosamund Pike as the pioneering scientist Marie Curie will close the festival, and according to Bailey sees Pike “bringing the fire, backbone and intelligence to the role it deserves”. Amazon Studios has US rights but has not set a release date yet.

Judy starring Renée Zellweger as Judy Garland is with Roadside Attractions in the US and is included among Special Presentations, as are the Safdie brothers’ crime caper Uncut Gems, Wayne Wang’s Coming Home Again, and Craig Brewer’s Dolemite Is My Name starring Eddie Murphy as 1970s performer Rudy Ray Moore and his titular alter ego.

A number of selections have already been confirmed or tipped to play elsewhere: Alejandro Amenábar’s Spanish Civil War saga While At War will open San Sebastian after TIFF, and Armando Iannucci’s The Personal History Of David Copperfield gets its European premiere after TIFF as the BFI London Film Festival opening night film. From Cannes comes Bong Joon-ho’s Palme d’Or winner Parasite and Céline Sciamma’s best screenplay winner Portrait Of A Lady On Fire.

“At a time when politically there’s so much conflict, a number of the strongest films are reaching across boundaries and generating empathy in places you might not expect,” said Bailey of the selection. “Jojo Rabbit takes us on a journey when you begin to empathise with this boy who’s been indoctrinated into Nazi ideology. Destin Daniel Cretton’s film Just Mercy with Michael B Jordan and Jamie Foxx is another one: no matter what your political position is on capital punishment, there’s no way you can help but feel for these characters. There are a number of [these films] and that’s great to see. Perhaps the poster boy is Fred Rogers, and we’re glad to have that film A Beautiful Day In The Neighborhood with us as well.”

“Among the US studio films we’re seeing so many more adult dramas and character-driven films that usually don’t come out of the big studios,” added Vicente. “So that is an interesting thing.”

The emerging filmmakers and films to watch, suggested Bailey, were I Am Woman director Moon, Gabriela Cowperthwaite (The Friend), The Sky Is Pink from Indian filmmaker and TIFF 2014 alumnus Shonali Bose (Margarita With A Straw), and Weathering With You from Makoto Shinkai, the rising Japanese animator behind 2016 hit Your Name.

Vicente noted plenty of anticipated titles from female directors, including A Beautiful Day In The Neighborhood, Harriet, Radioactive, The Sky Is Pink, Portrait Of A Lady On Fire as well as Abominable from Jill Culton and Hustlers, directed by Lorene Scafaria.

As previously announced, the world premiere of Daniel Roher’s documentary Once Were Brothers: Robbie Robertson And The Band (Canada) will open the festivities.

The information below is provided by TIFF and is not final or complete and is subject to change.

A Beautiful Day In The Neighborhood (US) - world premiere
Dir: Marielle Heller

The Song Of Names (Can) - world premiere
Dir: François Girard

Dolemite Is My Name (US) - world premiere
Dir: Craig Brewer