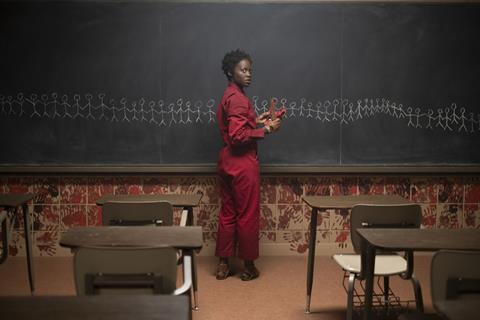 Captain Marvel stayed top of the tree this weekend. The film dropped 49% in its third outing, adding £3.4m for £29.5m cume.

Jordan Peele’s Get Out follow up Us, the horror film starring Lupita Nyong’o, posted a £2.8m opening in the UK this weekend, placing it second in the chart. The film played in 580 sites for an average of £4,828.

The Universal title opened in 47 markets this weekend, with the UK delivering the second-highest number behind the huge £53.3m ($70.3m) debut in North America.

In the UK, the film eclipsed the debut of Peele’s debut feature Get Out by some 32%, with that film having opened with £2.2m before climbing its way to £10.4m.

UK comedy Fisherman’s Friends posted a strong hold in its second weekend, falling just 16% with £972,836. That’s comfortably the smallest drop in the UK top ten. Including solid mid-week takings, which saw Mon-Thurs match its opening three-day of £1.2m, the film is now up to £3.4m. That’s now more than half of the lifetime of fellow UK comedy Finding Your Feet (£5.8m).

Fiennes has directed two previous films, the Shakespeare adaptation Coriolanus in 2011 and the period drama The Invisible Woman in 2013, which totalled £1m and £900,000 in the UK respectively.