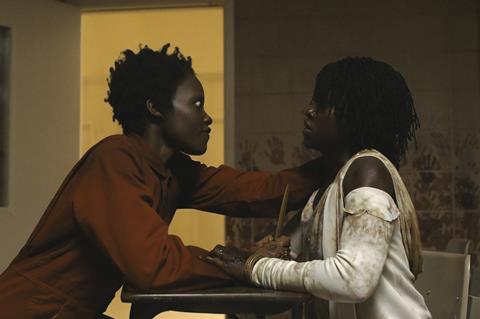 MARCH 25 UPDATE: Riding high on frenzied buzz and comparisons – by some observers in the US at least – to Alfred Hitchcock, Jordan Peele confirmed that he is the genuine article as Us, his follow-up to global hit Get Out, delivered the highest debut of all time for an original horror film in North America on a confirmed $71.1m.

Furthermore the story of a family hunted by their doppelgangers produced the third highest horror film opening weekend in North America, behind It on $123.4m and last year’s Halloween reboot on $76.2m.

Lupta Nyong’o, Winston Duke and Elizabeth Moss star in Us which premiered earlier this month at SXSW and is heading for a profitable ride given the reported budget of $20m excluding marketing costs. It opened in 3,741 theatres and should soar past $100m by next weekend. Get Out finished on $176m in North America in 2017, and grossed $255.4m worldwide.

Marvel Studios’ Captain Marvel slid to number two in its third session, earning $34.3m to push the running total to a commendable $320.7m. It looks unlikely to overtake Wonder Woman, which finished in North America on $412.6m, although it has comfortably overtaken its female-led DC Entertainment peer at the international and global box office.

CBS Films’ romance Five Feet Apart slipped a decent 35.2% in a second weekend of mixed fortunes for several films. The romance added $8.5m for $26.3m through Lionsgate and ranked fourth. Pantelion’s Spanish-language No Manches Frida 2 slipped 53.8% and one slot to number seven on $1.8m for $6.6m, while Paramount’s family animation Wonder Park fell 44.7% and one place to number three on $8.2m for a disappointing $29.5m.

Participant Media’s sci-fi Captive State dropped out of the top ten in its second session, sliding a heavy 69.4% and four places to number 11 through Focus Features on $959,165 for $5.3m. NEON’s moon mission documentary Apollo 11 has grossed an impressive $6.9m after a mere four weekends in release and held firm at number 12. Bleecker Street opened terrorist attack drama Hotel Mumbai starring Armie Hammer and Dev Patel at number 36 on $88,065 in four venues for a strong $22,016 average.