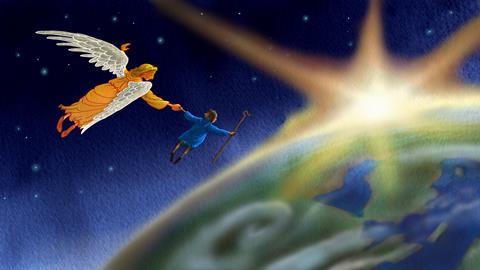 Kaleidoscope Film Distribution has secured worldwide rights (excluding UK TV) to On Angel Wings, an animation based on the book by War Horse author Michael Morpurgo.

Kaleidoscope will introduce the 30-minute special to buyers at MipTV in Cannes next month.

The writer and director of the animation is Dave Unwin who directed award winning TV special Father Christmas and The Wind in the Willows among others.

It is produced by Iain Harvey who executive produced the 1982 children’s classic The Snowman and produced The Very Hungry Caterpillar and Other Stories with his production company, The Illuminated Film Company.

The music is composed by Julian Nott who has worked with animator Nick Park on Wallace and Gromit.

The adaptation of Morpurgo’s picture book, published in 2006, is a re-working of the nativity. It centres on a young shepherd boy called Amos who gets his wish after the other shepherds leave him behind.

The Kaleidoscope deal was negotiated by Iain Harvey for The Illuminated Film Company and by Spencer Pollard, CEO and Caroline Stern, director of international sales and acquisitions for KFD.

UK broadcast rights have been sold to the BBC, which will screen the special in December.