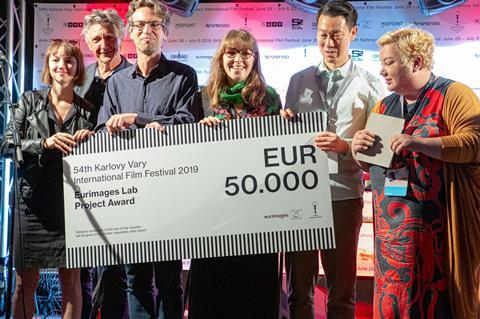 The award is worth €100,000 in post-production services, including a cash prize of €10,000 from Germany’s Barrandov Studios.

“The film tells the story of a 16 year- old boy who lives in the unique location of Transnistria,” explained the film’s co-producer Anna Shalashina of Russia’s Rock Films. “The area claimed its independence from Moldova in 1992 but it’s not recognized and it’s more a territory that lives in the Soviet past. Our main character wants to escape, he wants to achieve something in life. But the real reason for his escape is that he’s trying to battle with his ‘sin’ – his desire for his mother.”

Shalashina said the film is in early post-production and aims to be delivered by early 2020.

The Works in Progress jury was comprised of Khalil Benkirane, a producer and the head of grants at the Doha Film Institute, Latvia producer Aija Berzina of Tasse Film, and Virginie Devesa, CEO and head of sales at Paris-based Alpha Violet. Pigeon’s Milk was selected from nine projects from Central and Eastern Europe, the Balkans, the former Soviet Union, the Middle East, and North Africa.

The €5,000 Docs In Progress award, was presented to Afsaneh Salari’s The Silhouettes, a co-production between Iran and The Philippines, which was one of eight documentaries in the section.

“The Silhouettes, which is a working title at the moment, is the story of an Afghan family living in Iran, who has left Afghanistan 40 years to come and live in Iran,” directtor Salari told Screen. “The film follows the son of the family who wants to repatriate to Afghanistan – to live and work there – but is confronted with the opposition of his family. It’s a film about belonging, identity, separation and connecting to your roots through the past in order to reconcile with the future.”

“We are in post-production now,” she continued. “To receive such positive feedback on the project gives us more confidence that we’re really on the right track now and there’s now more hope for what comes next in the future of the film.”

The film is expected to be ready at the end of the year.

It was jointly presented b Karlovy Vary with the Creative Europe-backed Midpoint Feature Launch 2019 in Slovenia, and the When East Meets West co-production forum of the Trieste Film Festival. All eight projects from Central and Eastern Europe had gone through the Feature Launch 2019 programme.

The jury, made up of Majlinda Tafa of the Albanian National Centre of Cinematography, Czech director Tereza Nvotová, and Frank Peijnenburg, head of Screen NL at the Netherlands Film Fund, presented the €50,000 award to Kevin B. Lee and Chloé Galibert-Laîne’s Bottled Songs, a co-production between Germany, France, the US and Finland.

The jury described the film as “a courageous desktop documentary raising questions of privacy and identity by exploring online propaganda of the Islamic State.”

Bottled Songs is expected to be ready by the middle of 2020.