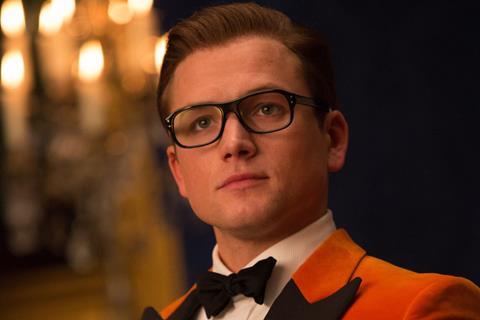 In the second weekend of international release, Kingsman: The Golden Circle captured over $50m. Chinese comedy Never Say Die debuts on $45.6m, while horror smash It brings in a further $37.6m.

In South Korea, Kingsman debuted on $16.7m, which made it the biggest opening ever for an 18+ rated film. The results in South Korea are three times bigger than its predecessor Kingsman: The Secret Service, and are bigger than the openings of Transformers 5, Fate Of The Furious, and Guardians Of The Galaxy 2.

The UK generated $5.4m for $20.3m and is number one in the market for the second weekend in a row, down only 32%. The UK results are 90% bigger than Kingsman: The Secret Service through the same point in release.

Kingsman: The Golden Circle’s $126.3m gross is outpacing the The Secret Service by 53% in the same markets at current exchange rates, with many top international markets still to come, including France on October 11, Argentina on October 12, and China on October 20.

Judwaa 2, from Fox International Productions and FoxStar, earned $11.8m from 3,562 screens in two international markets.  Judwaa 2 is the fourth biggest opening of 2017 in India. Elsewhere, War For The Planet Of The Apes added another $1.9m this weekend, taking the international total to $335.1m. Japan is the final international releasing market, scheduled to launch on October 13.

Captain Underpants: The First Epic Movie added $1.7m from 465 screens in seven markets, lifting the international gross to $36.6m. The animation debuts in France this week, followed by Holland on October 11, and Germany and Brazil on October 12. Hidden Figures launched in Japan, earning $595,000 from 71 screens in the market.  The  film now stands at $62.9m internationally.

Yang Song and Chiyu Zhang’s comedy Never Say Die debuted in China on $45.6m, and comes in second place at the international box office behind Kingsman: The Golden Circle and ahead of New Line’s It. Allen Ai, Xue Haowen, Li Ma, and Teng Shen star.

Martin Campbell’s The Foreigner ended the weekend in fourth place internationally after grossing $23.1m. The film starring Jackie Chan, Pierce Brosnan, Rufus Jones, and Katie Leung will be released in the US on October 13.

Victoria And Abdul grossed $3.8m in 28 territories for an international total of $19.3m. Combined with $1.3m from North America, the worldwide total is $20.6m. Germany produced $699,000 in its first week. The UK earned $1.2m in week three, down 29% from last weekend. The 15-day total in the UK is $9.4m. Next weekend, the film opens in France, French-Switzerland, Israel, the Philippines and Trinidad.

Amblin Entertainment and Walden Media’s A Dog’s Purpose debuted in Japan on $1.8m at 240 locations. This raises the combined Universal, Mister Smith and eOne international totals to $131.9m. Combined with North America’s total of $64.3m, the worldwide total is $196.2m. Japan is the final theatrical release for A Dog’s Purpose.

Flatliners kicked off its international rollout this weekend, grossing $3m in 21 markets, which represents 22% of the international footprint. The opening is 14% ahead of Nerve for the same group of markets at current exchange rates. Australia led all markets on $882,000, besting the opening of Final Destination 5 by 19%, while the UK generated $652,000 from 356 screens.

UPDATED: Cars 3 generated $5.1m as it opened in its final international territories over the weekend, Germany, Austria, and German-speaking Switzerland. Launching across German-speaking Europe, the animation opened behind It, but as the clear first choice for families at number two in all markets. Germany produced $2.9m, including previews, which is 10% below Monsters University,  while the opening in Austria is 26% ahead of Monsters University. China is the top market on $20.7m, followed by France $19.1m, Japan $16m, Mexico $15.6m, and the UK $15.1m.