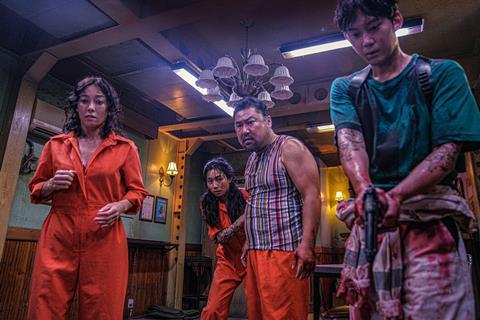 The film, written and directed by Kim Hongsun, will debut on Cinedigm-owned horror channel Screambox and Well Go USA’s martial arts and action channel Hi-YAH! in May 2023.

It premiered at Toronto in the festival’s Midnight Madness section in mid-September before receiving a theatrical release in South Korea on September 21 through The Contents On and in North America on October 7.

Set on a cargo ship transporting dangerous convicts from Manila to Busan, it follows the unleashing of a sinister force onboard when the prisoners start a riot.

The deal was negotiated by Jason Pfardrescher on behalf of Hi-YAH! and Well Go USA and Selin Kilic on behalf of Screambox and Cinedigm.

“This co-release on Hi-YAH! and Screambox ensures that loyal fans of each will get to revel in this boundary-pushing wild ride of a film,” said Pfardrescher, EVP of digital and theatrical distribution at Well Go USA.

Korean sales agent Finecut sold North America rights for Project Wolf Hunting to Well Go USA ahead of its Toronto premiere. Adding to a slew of further deals before its September debut, the film more recently sold to territories including Australia and New Zealand (Umbrella Entertainment), Singapore, Malaysia, Brunei, Indonesia and Vietnam (Clover Films) and the UK (Kaleidoscope Home Entertainment) ahead of AFM.