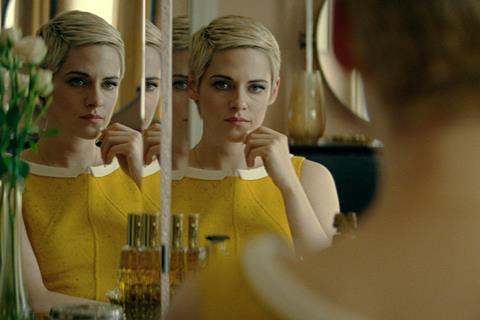 The 15th edition of the Zurich Film Festival, running Sept 26 to Oct 6, will fete US actress Kristen Stewart with is Golden Eye Award.

The actress will be at the lakeside event with director Benedict Andrews to present Seberg, in which she plays tragic French New Wave icon Jean Seberg, in a gala screening Oct 2.

Festival co-directors Nadja Schildknecht and Karl Spoerri praised Stewart for the diversity and depth of her filmography to date.

“Although she could have been involved in blockbuster movies after the Twilight series, Stewart has consistently opted for artistically engaged indie films by writers such as Walter Salles, Olivier Assayas and Ang Lee,” they said.

“She succeeded the difficult balancing act between mainstream and arthouse in an exemplary way. with her fearless portrayal of Jean Seberg she once again proves to be one of the most versatile actresses of our generation.”

Stewart will arrive in Zurich fresh from the world and north American premieres of Seberg in Venice and Toronto respectively.

As well as working between mainstream and arthouse productions, Stewart has also achieved the rare feat for an US actress of working successfully on both sides of the Atlantic.

In 2015, she became the first US actress to win France’s prestigious Cesar award in the best supporting actress category for her role in Olivier Assayas’ Clouds Of Sils Maria, in which she starred alongside Juliette Binoche.

More recently, Stewart has also branched into directing with the short film Come Swim – a poetic exploration of heartbreak – which screened at the 70th edition of the Cannes Film Festival as part of its anniversary celebrations.

In addition to Seberg, Stewart is soon to hit the big screen in Sony’s Charlie’s Angels, directed by Elizabeth Banks, and in Twentieth Century Fox’s Underwater, which is slated for a January 2020 release.

Inspired by true events, Seberg recounts how the actress was targeted by the FBI in the late 1960s, following her political and romantic involvement with Black Power activist Hakim Jamal.

ZFF will unveil its full line-up on Sept 12.