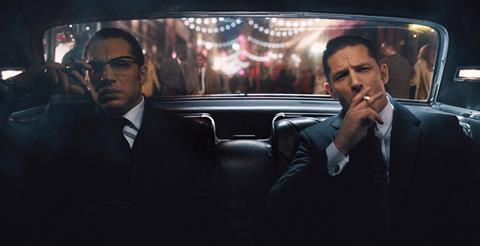 First they ruled London and now the Krays are ruling the UK box office as Legend posted a stunning record-breaking debut.

It is worth noting that even without previews, its Fri-Sun tally of $5.7m (£3.7m) would have seen it land the top spot.

The debut marks the biggest ever September opening at the UK box office and the biggest British 18 certificate opening, as well as being the third biggest bow for an 18 certificate film of all time behind Fifty Shades of Grey and Hannibal.

With strong reviews, Legend could be set for a healthy run at the UK box office and will aim to at least top Trainspotting’s $19.2m (£12.43m) as the biggest ever British 18 certificate film of all time.

As a result of Legend’s big opening, Maze Runner: The Scorch Trials had to settle for second on its UK bow.

The Scorch Trials will hope to also improve on The Maze Runner’s final tally of $13.7m (£8.89m) in the weeks to come.

eOne’s A Walk in the Woods receives a wide release, while Peccadillo Pictures’ A Girl at My Door, Sony’s The D Train and Axiom Films’ Tangerines are among the films receiving a limited release.