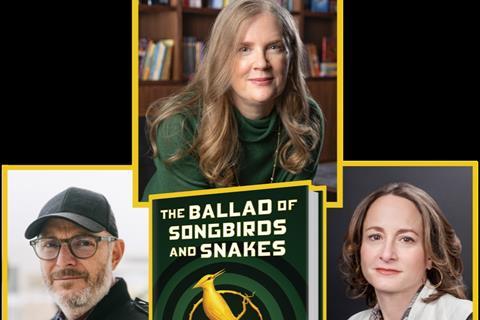 Lionsgate will adapt Suzanne Collins’s upcoming novel The Ballad Of Songbirds And Snakes, which takes place in the Hunger Games universe, into a tentpole.

The studio has re-enlisted several core members of the $2.97bn-grossing global franchise’s creative team. Color Force’s Nina Jacobson, who has produced all of the films in the franchise, will produce with her partner Brad Simpson, who will also be involved in a producorial capacity.

Francis Lawrence, who directed Catching Fire, Mockingjay Part 1, and Mockingjay Part 2, will return to the director’s chair. Collins will write the film’s treatment and Michael Arndt, the Oscar-winning screenwriter of Little Miss Sunshine,  will adapt the screenplay, after previously serving as one of the writers of Catching Fire.

Collins also will serve as an executive producer on the new film.

The film will focus on Coriolanus Snow at age 18, years before he would become the tyrannical president of Panem (played in the films by Donald Sutherland). Young Coriolanus is handsome and charming, and though the Snow family has fallen on hard times, he sees a chance for a change in his fortunes when he is chosen to be a mentor for the 10th Hunger Games, only to have his elation dashed when he is assigned to mentor the girl tribute from impoverished District 12.

The Ballad Of Songbirds And Snakes will be published by Scholastic simultaneously in print, digital and audio formats in the US, Canada, the UK and Ireland, Australia, and New Zealand on May 19. The first three books in Collins’s series – The Hunger Games, Catching Fire, and Mockingjay – have sold more than 100million copies in print worldwide and have been translated into 52 languages.

Jim Miller, the Lionsgate executive who has served as the studio’s project executive on all of the franchise’s films, will oversee the production.