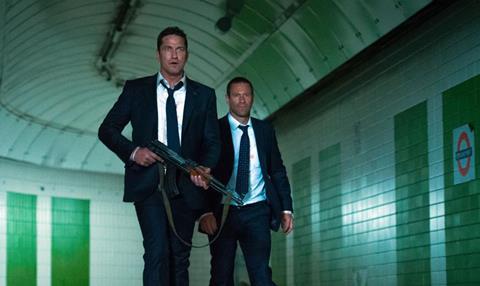 Barring a dramatic collapse, London Has Fallen should comfortably pass that tally, even if the arrival of Kung Fu Panda 3 this weekend will mean its stay at number one is shortlived.

That marks the lowest debut for a Nicholas Sparks adaptation, although it’s worth noting that The Choice also received the smallest release site-wise.

True Grit is currently the Coens best-ever performer with $12m (£8.46m), and Hail, Caesar! will require some robust midweek performances and weekend holds if it’s to challenge that.

It won’t officially be in the chart until next week, but Kung Fu Panda 3 is off to a promising start at the UK box office.

Fox’s threequel banked a non-final $2.2m (£1.57m) in previews on Saturday and Sunday which would have been good enough for second spot this weekend. It opens nationwide this Friday [March 11].

Grimsby followed up its disappointing opening with a $1.1m (£800,000) second weekend as it dropped to fourth.

Also for Warner Bros, audiences avoided Truth, which unsurprisingly struggled on its UK debut as it took only $37,000 (£26,000) from 118 sites for a weak $312 (£220) site average, although it was unlikely to have had full showtimes throughout the weekend.

Universal’s The Witch and Curzon Film World’s Anomalisa both receive wide releases, while Icon Film Distribution’s The Ones Below and Peccadillo Pictures’ Next To Her are among the films receiving a limited release.