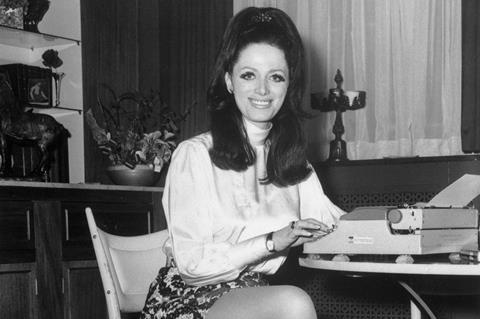 Eve Gabereau’s Modern Films has secured UK and Ireland rights to a raft of documentaries set to premiere at Tribeca Film Festival and Sheffield Doc/Fest.

The acquisitions are led by Laura Fairrie’s Lady Boss: The Jackie Collins Story in a deal with AGC International, the sales and distribution arm of Stuart Ford’s AGC Studios. Following its world premiere at Tribeca next month, Modern Films is planning event preview screenings of the documentary in late June followed by a wider theatrical release on July 2.

The feature offers a portrait of the late romance novelist, narrated by a cast of Collins’ closest friends a family. It was produced by Lizzie Gillett of the UK’s Passion Pictures and John Battsek with AGC Studios, CNN Films and BBC Arts. The documentary will also air on CNN Films in late June and on BBC Two in the UK in autumn 2021.

Modern Films has also secured UK and Ireland rights to Mark Cousins’ The Story Of Looking in a deal directly with BOFA Productions. The feature will world premiere as the closing film of Sheffield Doc/Fest, which announced its full line-up today, and a theatrical release is being planned for the autumn.

The latest feature from UK documentary maker Cousins is inspired by his book of the same name. Faced with the threat of losing his sight, Cousins embarks on an intimate journey from his bed to explore the central role of looking in his own life, as well as the history of the human gaze.

Further documentaries newly acquired by Modern Films include Julien Faraut’s The Witches Of The Orient from Swiss sales agent Lightdox, which premiered at International Film Festival Rotterdam (IFFR) in February, and Bill Benz’s St. Vincent mockumentary The Nowhere Inn, first seen at Sundance in 2020, in a deal with New York-based Visit Films.

The Witches Of The Orient, which tells the story of the 1964 Japanese Olympic volleyball team, will receive a theatrical and virtual cinema release in the UK and Ireland on July 16 – a week before the Tokyo Olympics are scheduled to begin.

The film combines 16mm footage of the team in training with previously unseen archive footage, manga animation and interviews with four of the original team. French director Faraut previously made documentary John McEnroe: In The Realm Of Perfection, which screened at the Berlinale in 2018 and was also released by Modern Films.

The Nowhere Inn is a mockumentary starring, co-written and centred on indie rock musician St. Vincent. Annie Clark, aka St. Vincent, wrote the screenplay with Portlandia creator and star Carrie Brownstein. It offers a portrait of her music, touring life and public persona, but the feature begins to bend the genre as the real Annie Clark and the stage persona of St. Vincent begin to merge in unexpectedly dark ways.

St. Vincent’s latest album Daddy’s Home was released last week and IFC Films recently acquired North American rights to the film. Modern Films plan to time their release with the UK leg of her album tour in a bid to host a performance alongside a screening.