The results are in from Screen International’s team of top film critics at the Cannes Film Festival. 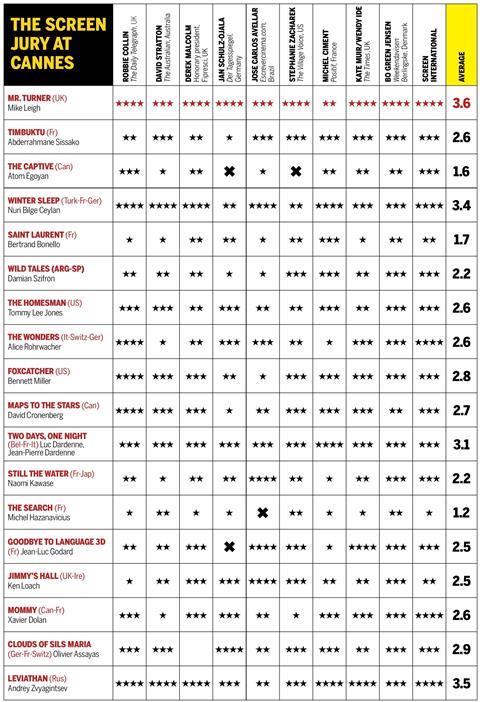 Screen International’s band of top film critics taking part in our annual – and always provocative – Cannes Screen Jury Grid were pretty much on the ball for this year’s festival, and while some favourites failed to tally with the views of the official Cannes jury it is easy to see where opinions coincided.

The bookmakers had Nuri Bilge Ceylan’s Winter Sleep as favourite to take the main prize going into the festival, and so this proved correct. And while the film never quite reached the Screen jury’s top score - that honour fell to Mike Leigh’s Mr. Turner, which took the lead from the start and never really looked like being beaten - it remained in second place right up until the final day.

Unlike some Cannes in recent years there was a real sense amongst the critics that this was a solid selection going into the festival. Certainly there was a big question mark against the low amount of women directors, but there were some heavyweight filmmakers amongst the selection…leading to much anticipation.

In fact things started well. Timbuktu was the first film screened to reviewers and proved to be a welcome surprise for many, with early thoughts that the timing of its subject matter could not better when it comes to final awards. This proved to not be the case, but Mike Leigh’s Mr. Turner certainly hit the sweet spot, with an excellent average score of 3.6 that gave all of the rest something to aim for.

Winter Sleep arrived shortly afterwards and it was clear at that early stage that this and Mike Leigh’s film would be slugging it out for the lead in the Screen chart, let along the main awards themselves.

The only other films to head past the Holy Grail average score of 3 were the Dardenne brothers’ Two Days, One Night (with 3.1) and Andrey Zvyagintsev’s Leviathan, the last film to receive its competition screening and which took a hefty 3.5 average score.

The losers this year round were Michel Hazanavicius’s The Search (with 1.2), Atom Egoyan’s The Captive (with 1.6) and Bertrand Bonello’s Saint Laurent (with 1.7).

But there were also plenty of well scored films such as Bennett Miller’s Foxcatcher, David Cronenberg’s Maps To The Stars, Tommy Lee Jones’s The Homesman and Alice Rohrwacher’s The Wonders, which pointed to a stronger than average Cannes.

There is often a sense that critics can be more generous of spirit at the start of the festival (still fresh and excited) and at the end (tired and ready to go home), but this year it should also be noted that a chunk of the films screened to reviewers in Paris, London and the US in advance of the festivals, perhaps giving some the chance to mull over their scores rather than have to respond straight after a first Cannes screening.