At yesterday’s Reality Check conference at the International Film Festival Rotterdam (IFFR), two panels of film professionals discussed how their careers are changing as the business undergoes radical change. 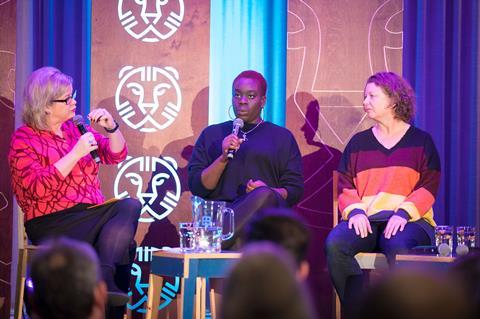 Speaking on the day’s first panel, which focused on the increasing popularity of “new” stories, and how these original ideas were unearthing new audiences, Akua Gyamfi took the opportunity to highlight how the industry is now waking up to the benefits of promoting diverse voices.

Gyamfi is the founder of the British Blacklist, an online hub dedicated to the promotion of black talent across the screen and stage.

She said that her initiate was set up as a response to a lack of diversity across industries including film, TV and theatre, and that in the past it had been “hard to have diverse voices at the forefront [of the industry]” and that “everyone has been trying to convince the gatekeepers that their voice really matters”.

“Certain communities are fed up of seeing a certain perspective of black people, gay people, women,” she suggested.

While diversity on screen has been improving – “it’s not there yet,” Gyamfi added. And behind the camera, the situation is not improving quickly enough.

“If you don’t have a crew that is reflective of the story you’re trying to tell, it will fail,” she said.

Gyamfi acknowledged that certain initiatives – such as the British Film Institute’s Diversity Standards policy – were positive, but suggested that they still risked not creating real change. “Executives will say, ‘yes, let’s get this diverse talent in’, but you can become a box-ticker and not be allowed to have your own voice – diversity then becomes a buzz word. You need to have the space to develop your own story, and put the trust in those people.”

She pointed to fact that some filmmakers are now taking to distributing their work through unconventional channels so that they can retain more control. A recent success story is UK musician and filmmaker Rapman’s Shiro’s Story, a gritty UK drama that has racked up more than 10 million views on Youtube.

“Filmmakers are taking to the internet. There’s something about controlling your own product and not going through the faff of the industry,” she suggested.

Speaking on the same panel, Dutch filmmaker Nanouk Leopold (It’s All So Quiet) said that new audiences were being created by original and interesting content.

“With the development of the internet, many things are changing and people are watching very different things. My son watches people video gaming for like two hours,” she continued. “It has to do with choice, people want to be led.”

Gyamfi said that audiences are “hungry for new stories” and that everyone is now reacting to the fact that conventionally-held industry beliefs are being rebuked. “We have been told black stories don’t sell, no one is interested outside of the stereotypical stories - but it’s not true.”

She pointed to Black Panther as a film that, by doing things differently with its “black narrative, black cast, and representation of black women”, was going to “change the whole culture of film and superhero franchises”.

Gyamfi also highlighted UK musical Been So Long as an example of a project that would typically be considered a risk, with there being essentially no convention for UK musical features led by two black cast members. The film was snapped up by Netflix in a significant deal.

She claimed that “financiers use ‘risk’ as a defensive word” and that it was often wheeled out as an excuse to not try anything new. However, if diverse filmmakers are given the opportunity to create stories that are personal to them, that content will do well, she said. “Speak about what you know – if it’s authentic, people will buy into it. If the story is honest, it will travel.”

In the day’s second panel, which focused on new models for development, filmmaker Noaz Deshe (White Shadow) claimed, “We are in a glorious stage where people have accepted that things are evolving. Certain things that sounded crazy a few years ago aren’t so crazy any more. There seems to be a lot of openness for new ways.” 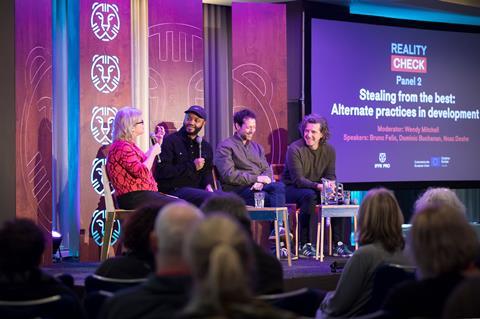 Bruno Felix, who runs Dutch production outfit Submarine, which works across multiple entertainment mediums, added that he is seeing “great enthusiasm for the crossover type of story development [across film, TV, short form, VR, etc.]” and that gatekeepers are more open to exploring these new modes of content creation.

“If you are a filmmaker, you have all the power right now – it’s a buyers’ market,” added UK producer Dominic Buchanan, whose credits include Channel 4 and Netflix series The End Of The Fucking World. “People will pay for it if you can package it for a particular place [such as Netflix]. As a producer, I’m trying to figure out where these things should live.”

“It’s great that you can now reach a global audience [through an online platform, for example]. There’s real money for great art and that’s super,” concluded Felix.