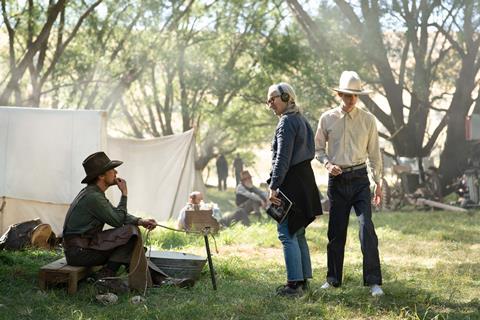 Benedict Cumberbatch, Jane Campion and Kodi Smit-McPhee on The Power of the Dog set

The New York Film Critics Circle (NYFCC) has planted a flag in the ground for next awards season and will stage its annual gala awards winner on January 4 2023.

The group also announced on Tuesday (April 5) that Jordan Hoffman will serve as the 2022 chairperson of the NYFCC and Stephen Garrett will continue as the group’s general manager.

The recent season’s ceremony, after a delay due to the pandemic, saw former US vice president Al Gore present best documentary to Flee, Martin Scorsese present best director to eventual Oscar winner Jane Campion for The Power of The Dog, and Guillermo del Toro virtually present best actress to House Of Gucci star Lady Gaga, who accepted her award in person.

“Man plans and God laughs, as the old saying goes, but I feel confident that our 2023 ceremony will happen both in person and in January, where it belongs, for the first time since 2020,” said Hoffman, who looked forward to honouring “a spectrum of innovative, enriching, and stimulating films and performances”.