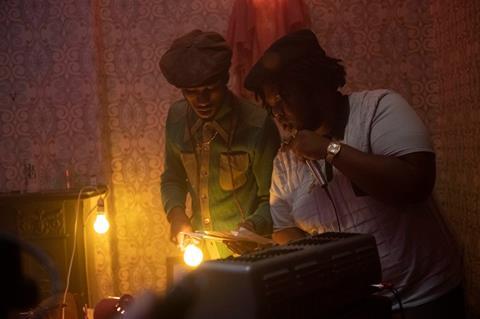 Festival brass have moved the festival forward by one week to September 17–October 11 to expand access to the festival via drive-in screenings.

McQueen’s Lovers Rock (pictured) was previously unveiled as the opening night selection and is joined by Mangrove and Red, White And Blue, the latter of which is a 1980’s-set drama starring John Boyega as Leroy Logan, a member of the Metropolitan Police Force who witnessed and experienced institutional racism.

The selection includes Heidi Ewing’s love story I Carry You with Me (Te Llevo Conmigo); Jia Zhangke’s documentary about three authors who chronicle life in China since the 1950’s in Swimming Out Till The Sea Turns Blue; Sundance feelgood documentary hit The Truffle Hunters from Michael Dweck and Gregory Kershaw; and Gianfranco Rosi’s Notturno, a meditation on the rise of ISIS set along the borders of Iraq, Kurdistan, Syria, and Lebanon.

As previously announced, Chloé Zhao’s Nomadland is the Centerpiece selection on September 26, and Azazel Jacobs’s French Exit will close the festival on October 10.

I Carry You With Me (Te Llevo Conmigo)
Dir. Heidi Ewing

Swimming Out Till the Sea Turns Blue
Dir. Jia Zhangke

“The disorientation and uncertainty of this tough year had the effect of returning us to core principles,” said Dennis Lim, director of programming for NYFF. “To put it simply, the Main Slate is our collective response to one central question: which films matter to us right now?

In May, organisers at NYFF presented by Film at Lincoln Center unveiled a new festival structure under the leadership of Hernandez and Lim. The festival’s offerings have been streamlined into five sections, with the Main Slate at the heart.

Currents, Spotlight, Revivals, and Talks will be announced in the coming weeks.