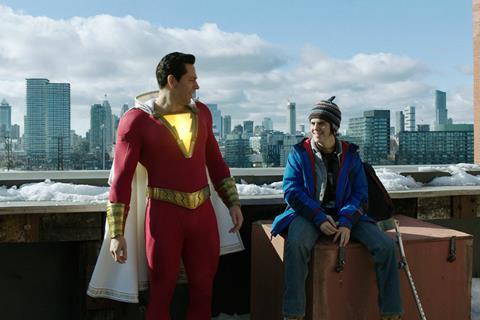 The vibrant weather in the UK over the Easter bank holiday weekend spelled bad news for cinemas, with no film taking more than £1m over the Friday-Sunday session and 50%+ drops registered by most of the key holdovers.

A 4k restoration of The Goonies was released in UK cinemas this weekend, taking £58,000 from 370 sites.

Head Full Of Honey, Til Schweiger’s comedy drama starring Nick Nolte as a man suffering from Alzheimer’s, posted an £8,000 opening from 134 sites, a remarkably low site average of just £60 per venue.

Greta, Neil Jordan’s mystery thriller starring Chloë Grace Moretz as a young woman who befriends a lonely widow (Isabelle Huppert) who harbours a dark agenda, opened with a £202,665 Fri-Sun from 385 locations, an average of £526. Including previews and the bank holiday Monday, the film is up to £405,309 in the UK.

That figure already surpasses Jordan’s previous release, Byzantium, which took £257,652 in the UK back in 2012. His best-performing title remaining Interview With The Vampire which took £10.7m in 1995.

A re-release of Monty Python’s Life Of Brian took £187,847 this weekend. The event cinema release of the Royal Shakespeare Company’s staging of As You Like It took £232,860.

Dragged Across Concrete, the cop drama starring Mel Gibson and Vince Vaughn, opened to £58,199 this weekend from 122 sites, an average of £477, though the film primarily only played one evening screening per venue per day. Including previews its cume so far is £69,249.

Loro, Paolo Sorrentino’s biopic of controversial figure Silvio Berlusconi, opened with £32,516. Including previews and the bank holiday Monday, the film is up to £47,441.