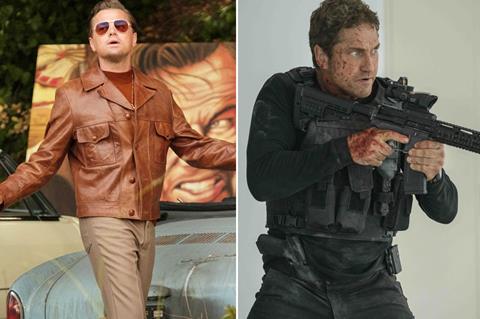 Retaining its place at the top of the UK box office tree this weekend was Quentin Tarantino’s Once Upon A Time… In Hollywood. The film added £2.1m Fri-Sun, a fairly heavy drop of 59% on its opening session. The good weather across most parts of the UK, which sustained over the entire bank holiday weekend, hampered takings across the board.

Angel Has Fallen, the third entry in the Gerard Butler-fronted action franchise, opened in second place this weekend, taking £1.4m Fri-Sun. The film also took £718,402 previews, and a further £361,692 on the bank holiday Monday, which takes it to £2.5m to date.

That weekend result falls well below the two previous entire in the franchise, Olympus Has Fallen (£2.2m in 2013) and London Has Fallen (£3.2m in 2016). The good weather in the UK won’t have helped the release, which will look to make up some ground on the previous two entries in the coming weeks, with Olympus ending on £6.2m and London on an unassailable-looking £11m.

The Lion King dropped to third in its sixth weekend, falling 57% week on week with £1.1m. Including the bank holiday Monday, the film has moved to £69.4m to date.

Pedro Almodovar’s Pain & Glory opened to £380,000 from 122 sites, making for an impressive site average of £3,115. The film premiered in Cannes in Competition this year and picked up the festival’s best actor prize for Antonio Banderas, who stars with Penelope Cruz. Pathe has UK rights and the film was released by its output partner 20th Century Fox.

That’s a very promising start for the Spanish-language feature. Almodovar’s 2016 feature Julieta began with roughly the same, £372,916, and ended up being that year’s only arthouse foreign-language release to top £1m, taking a total of £1.3m.

Hail Satan?, Penny Lane’s feature about the rise of the controversial religious group known as The Satanic Temple, opened to £11,401 from 23 sites, an average of £496. With previews and the bank holiday Monday factored in, the film is on £20,782.