Moonlight, Arrival and Manchester By The Sea in the chasing pack. 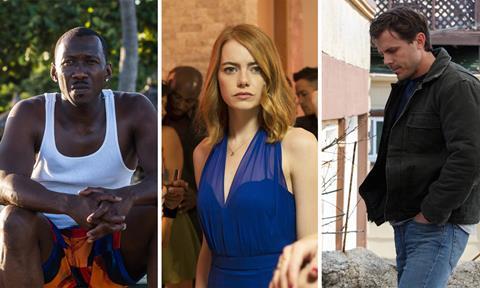 The nominations for the 89th Academy Awards have been announced in Los Angeles and Lionsgate’s La La Land leads the way with 14 nods.

That equals the record shared by Titanic and All About Eve.

It is one of nine films in the best picture category; it’s competing against Arrival; Fences; Hacksaw Ridge; Hell Or High Water; Hidden Figures; Lion; Manchester By The Sea and Moonlight.

Manchester By The Sea marks the first time a streaming service - Amazon Studios - has been nominated for best picture.

Casey Affleck (Manchester By The Sea) will be the favourite for best actor after winning the Golden Globe earlier this year. He goes up against Andrew Garfield (Hacksaw Ridge), Ryan Gosling (La La Land), Viggo Mortensen (Captain Fantastic) and Denzel Washington (Fences).

In the best supporting actress list, three black actors have been nominated in the same category for the first time ever. Viola Davis, the strong favourite (for Fences), competes against Naomie Harris (Moonlight), Octavia Spencer (Hidden Figures), Michelle Williams (Manchester By the Sea) and Nicole Kidman (Lion).

Best animated feature is especially strong this year, featuring a mix of critically acclaimed foreign films - My Life As A Zucchini and The Red Turtle, another strong effort from Laika - Kubo And The Two Strings, and big budget Disney blockbusters Moana and Zootopia.

For best foreign language film, Tanna marks the first time an Australian film has been nominated in the category. It’s up against Toni Erdmann (Germany), The Salesman (Iran), Land of Mine (Denmark) and A Man Called Ove (Sweden), which also got a nod for makeup and hairstyling.

The 2017 Academy Awards will be hosted by Jimmy Kimmel on Sunday, February 26.