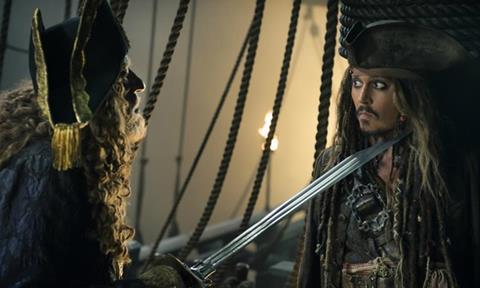 UPDATE: Pirates Of The Caribbean: Dead Men Tell No Tales opened in 91% of the international market day-and-date with North America over the weekend.

Disney’s latest tentpole, directed by Joachim Rønning and Espen Sandberg, generated $247.8m internationally in its first weekend of release, while North America brought in $78.2m for a $326m global debut.

Pirates Of The Caribbean: Dead Men Tell No Tales opened at number one in all markets, except in India where it was the number one western film.

China delivered $92.3m, the third-highest three-day opening weekend for any Disney title behind Civil War and Ultron. The film has already exceeded the entire total run of Pirates 3 and Pirates 4 in that territory and will benefit from the Dragon Boat Festival holidays on Monday and Tuesday.

South Korea produced $12.3m for a solid 49% market share, placing it just 12% behind the opening weekend of Pirates 4, while France debuted on $9.6m for 52% market share, ahead of Maleficent and The Jungle Book.

The 1,088-screen launch of Pirates Of The Caribbean: Dead Men Tell No Tales was the widest in IMAX history and generated $14m at the international box office, the second biggest international IMAX opening in May after Captain America: Civil War.

In China, Pirates will earn an estimated $9m of IMAX box office on 401 screens including results from Monday’s start of the Dragon Boat Festival.

Marvel Studios’ Guardians Of The Galaxy Vol. 2 added $11.7m during the holiday weekend from 56 territories for $453.2m.

In its third weekend of release, Guardians Of The Galaxy Vol. 2 dropped by 33% in Japan to take its running total there to $7.9m after 18 days.

Diary Of A Wimpy Kid: The Long Haul grossed $2.4m from 17 markets for $2.7m. The family film debuted in the UK on $1.9m for second place, while the UAE generated $105,000. The film opens in three markets this week, including Germany.

Action-comedy Snatched brought in $1.4m from 12 markets, lifting the international sum to $9.4m.

UPDATE: King Arthur: Legend Of The Sword brought in $9.2m from 64 territories, raising the international total to $85m.

The Charlie Hunnam and Jude Law action adventure added $1.1m in France in its second week for $4m, while Brazil added $974,000 for $4m in week two.

This week, Warner Bros’ Wonder Woman will debut on 1,008 IMAX screens in 57 markets.

UPDATE: The Fate Of The Furious crossed $1bn at the international box office on Sunday after adding $3.5m in 41 territories for $1.002bn, which is the third time for Universal and the sixth time in history that a film has reached that milestone.

F. Gary Gray’s action tentpole is now a member of the international billion dollar club with Avatar, Titanic, Furious 7, Star Wars: The Force Awakens and Jurassic World. Universal has three of the top six international films of all time.

In China, the film has grossed $387.4m (2.7bn RmB) and ranks as the highest grossing foreign film of all time in China.

The horror opened at number three on $767,000 in Mexico, behind Pirates Of The Caribbean: Dead Men Tell No Tales and How To Be A Latin Lover.

South Korea is holding at number three in week two on $3.4m, down 49% from last weekend for $12.9m. It is the highest grossing international market for Get Out.

Hanni & Nanni 4, the latest film in the German family franchise, opened in Germany, Austria and German-Switzerland over the weekend, generating $413,267.