Feelgood comedy drama leads the pack on social networks in the UK. 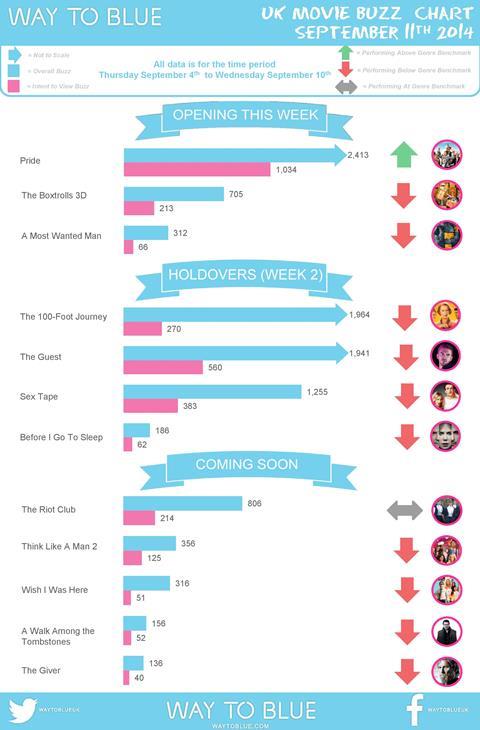 Matthew Warchus’s Pride has marched to the top of the social media buzz chart in the UK, according to Way to Blue.

The true story of gay activists who supported miners during the strike of 1984 generated more than 2,400 comments from Sept 4-10, with 43% of those expressing intent to view.

The film, starring Bill Nighy, Andrew Scott and Imelda Staunton, opens across the UK today (Sept 12). Pride received its world premiere at Cannes in May and screened at the Toronto International Film Festival last week.

The film drew more than three times as many comments as animation The Boxtrolls 3D and Anton Corbijn’s A Wanted Man, both of which open this weekend.

Both generated more than 1,900 comments, with nearly 30% of The Guest comments expressing intent to view.

Of the films coming soon, Lone Scherfig’s British elite drama The Riot Club, starring Max Irons and Sam Claflin, led the charge with more than 800 mentions – 25% of which expressed intent to turn comments into tickets.