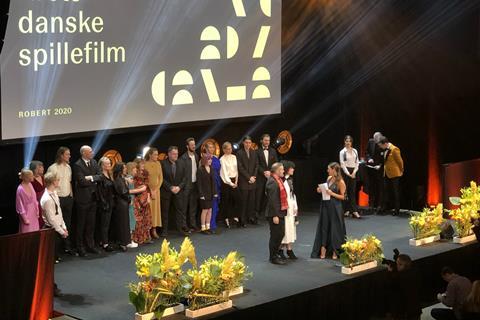 The team behind ‘Queen Of Hearts’

May el-Toukhy’s age-gap relationship drama Queen Of Hearts dominated the winners at the 36th Robert awards in Denmark, taking home nine prizes from 17 categories in which it was eligible.

el-Toukhy became the first woman to receive the best director prize since the category was introduced in 2001.

Queen Of Hearts follows a successful lawyer (Dyrholm) who begins an affair with her teenage stepson that comes to threaten her seemingly perfect life.

Daniel, Niels Arden Oplev’s biopic of Danish photographer Daniel Rye who was held hostage by Isis in Syria in 2013, picked up four awards including best actor for Esben Smed in the lead role.

Queen Of Hearts was Denmark’s entry to the international feature award at the 2020 Oscars, although it did not make it to the shortlist stage. It did win the world cinema – dramatic audience award at Sundance 2019.

Feras Fayyad’s Syrian war documentary, which has received an Oscar best documentary nomination, won the equivalent prize at the Roberts.

The awards were presented on Sunday, January 26 by the Danish Film Academy.