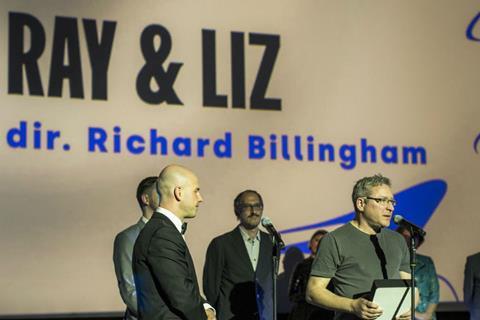 Billingham’s feature debut - which is being handled internationally by Luxbox - had its world premiere at last year’s Locarno Film Festival and has since picked up top awards at festivals ranging from Thessaloniki and Seville to Luxembourg and Batumi.

The best director award was presented to Hungary’s Zsófia Szilágyi for her debut One Day which won the FIPRESCI prize in Cannes last year. Lola Dueñas was named best actress for her performance in Celia Rico Clavellino’s San Sebastian award-winner Journey To A Mother’s Room, and local actor Paulius Markevičius took home the best actor honours for his role in Marija Kavtaradzė’s road movie Summer Survivors. The latter was also named best Lithuanian film at the festival’s award ceremony at the weekend.

Further awards included the FIPRESCI prize for Danish director Rasmus Kloster Bro’s Cutterhead and the audience award was won by Lebanese filmmaker Nadine Labaki’s Capernaum. The latter is being released in Lithuania this week by the festival’s own distrbution arm KP Distribution.

The festival was staged in 19 cities throughout Lithuania, including Kaunas and Klaipeda, in addition to the capital Vilnius, and had posted a record-breaking 125,000 admissions, up from 2018’s total of 116,500.

Only six of the 17 Coming Soon projects in the parallel Meeting Point Vilnius (MPV) industry platform were pitched by director and producers hailing from the three Baltic states, while the rest of the line-up came from countries as diverse as Albania, Belarus, Germany, Hungary Romania, Moldova and Ukraine.

Some international guests expressed reservations about the wisdom of the platform casting its net further afield to also include a project from Portugal – Marta Ribeiro’s Undergrown - which seemed out of place at a Baltic event.

Ukrainian director Antonio Lukich won the platform’s main award, with a cash prize of €3,000, for his comedy My Thoughts Are Silent, while Karolis Kaupinis’ debut Nova Lithuania received won the AVAKA award for best Lithuanian pitch.

Slovakian director Lucia Kasova and her producer Nazarij Klujev picked up the Vilnius Film Cluster post-production award for the documentary The Sailor. It came with €3,500 worth of post services and free accreditation to the Cannes Marché du Film’s film industry workshop next month.

The incentive scheme in its new form will be in place until 2023.