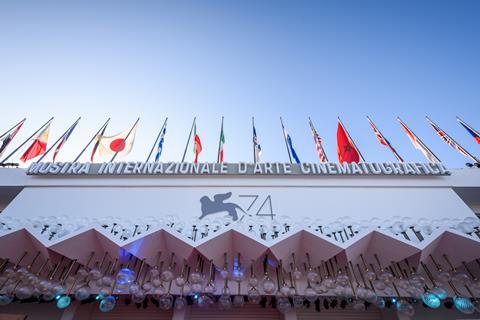 Luca Zaia, governor of Italy’s Veneto region, which encompasses Venice, confirmed on Sunday (May 24) the Venice Film Festival “will happen in September as scheduled”.

“I have talked with the Biennale president Roberto Cicutto … about the Film Festival and though there won’t be all of the productions we are used to see, because film shoots have been halted, the Festival will happen as planned,” read the statement issued by Zaia.

Although not official confirmation the festival will definitely take place - that is expected to come directly from the Biennale in the upcoming weeks - it is an important hurdle cleared in the race for a physical version of Venice 2020 to take place.

Italy’s regional governments play a crucial role managing the country’s health hazards and emergency measures. It is up to the individual region to greenlight events such as Venice Film Festival and to evaluate the containment and social distancing measures they have put in place in light of the coronavirus pandemic. Significantly, Zaia has a seat on the board of the Biennale.

The statement follows a series of partial confirmations from Biennale president Cicutto: On April 20 he told Cinecittà News, ”The festival should be granted extraterritorial rights when talking about security measures… Our deadline for a final decision is the end of May.”

On May 18, in an announcement its Architecture festival is moving directly to 2021, the Biennale confirmed the film festival is still expected to happen from September 2-12, 2020.

Cinemas in Italy have been given the greenlight from the government to open from June 15 following a strong push from the minister of culture Dario Franceschini. Outdoor screenings are allowed up to a maximum of 1,000 people; indoor ones are allowed audiences of up to 200 people. Social distancing will be enforced in both cases. They have been closed due the pandemic lockdown since mid-March.

It is not clear what rules will be in place in September and whether Venice will be seeking any special dispensations.

If a physical edition of Venice in any form does take place in September, it will be the first A-list film festival to take place since Berlin in February and only the second major film festival to be held anywhere in the world since then. A “modified” version of the Sarajevo Film Festival is on track to take place from August 14-21 in Bosnia-Herzegovina. Otherwise, all of Europe’s spring and summer festivals including Cannes, Locarno and Karlovy Vary in their usual forms have been forced to cancel following national lockdowns, social distancing and travel quarantine requirements put in place due to the pandemic.

Cannes is expected to announce the films on its ‘2020 label’ in the next 10 days. Whether any of those films will also be selected for any version of Venice 2020 remains to be seen.