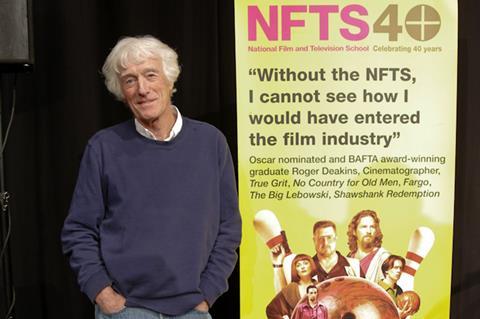 Roger Deakins will be the recipient of the 2018 Sue Gibson BSC Cinematography Award, the UK’s National Film and Television School (NFTS) has announced

The award recognises an NFTS cinematography alumnus who has “advanced the profession of cinematography in a significant way”. It was first presented last year.

Gibson, who died in 2016, was an award-winning NFTS alumna and also the first female president of the British Society of Cinematographers (BSC). Her credits indlude Alien v Predator, The Holiday and Poirot.

Deakins won his first Oscar earlier this year for Blade Runner 2049 after receiving 14 nominations for his previous films.

He will receive the Sue Gibson award at the NFTS later this year.

This year’s other nominees were Ula Pontikos for Film Stars Don’t Die In Liverpool, Benjamin Kracun for Beast, Charlotte Bruus Christensen for A Quiet Place, Benoit Soler for Mobile Homes and Jakob Ihre for Thelma,  They were voted for by more than 100 NFTS cinematography alumni.

“The NFTS gave me a solid base from which to move forward,” Deakins said. ”Sadly, as one is constantly reminded, many others are not so lucky. Thank you for the honour of this award and my thanks to Sue for being who she was.”