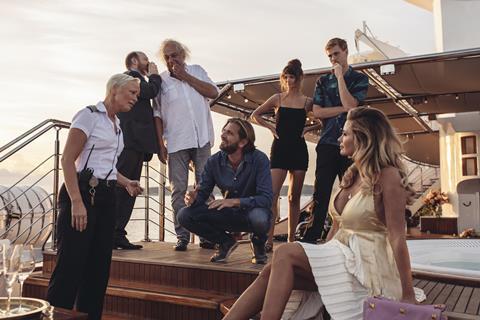 ‘Triangle Of Sadness’, behind the scenes

Ruben Östlund has wrapped the shoot for his next feature Triangle Of Sadness in Greece, overcoming a series of pandemic-related challenges for the production.

Triangle Of Sadness – now budgeted around $15m (€13m) – completed a nine-week shoot on November 13 and is Östlund’s biggest production to date as well as his first in the English language. It also marks his follow-up to The Square, which won the Palme d’Or at Cannes in 2017 and secured an Oscar nomination.

The Swedish filmmaker said: “It was already a huge project from the beginning, it was already crazy doing a film about this modern world and set partially on a deserted island.”

Triangle Of Sadness is a satire that follows a model couple, played by former Screen Star of Tomorrow Harris Dickinson and Charlbi Dean, who are invited on a luxury cruise. After the yacht sinks, they are left stranded on a desert island with a group of billionaires and a cleaning lady, turning the hierarchy on its head as a fight for survival ensues.

“Anytime you finish a shoot and you are satisfied with the material, that is a very pleasant feeling. But this time it’s even more pleasant because we had all this chaos. I’m very happy and relieved,” Östlund told Screen, as he left Greece on November 15.

Reflecting on the themes of the script, which he has been mulling throughout 10 months of production, Ostlund said: “Rich people are nice, they just don’t want to pay taxes.”

Östlund also appreciated the symbolic value of being able to shoot on the Onassis yacht, the legendary Christina O., which measures 325-feet (99 meters) long.

The shoot began on February 19 in Trollhättan, Sweden (home to backer Film i Vast), shooting for 25 days before pausing as a result of the pandemic. The team then hosted a further 10-day shoot in Trollhättan in late June with Woody Harrelson.

Finally, they were able to continue in Greece for nine weeks starting in late September. Harrelson had completed his scenes in Sweden in June so was not required for the Greek shoot.

They chose the island of Evia as their deserted island in the film. “It is a very unique place, it has a wild background of almost jungle style greenery with a complex of five beaches,” said Giorgos Karnavas, producer at the film’s Greek partner, Heretic. It helped that the island was an area of Greece that had the fewest cases of Covid-19.

The weather also worked in their favour. As Karnavas told Screen: “The weather was unprecedented, it was fantastic. We managed to shoot straight summer even up to mid-November.” They even had calm seas for the yacht scenes.

Heretic went beyond the basics of Covid-19 safety measures. “We enhanced the national protocol,” said Karnavas, noting that Heretic also worked on two other international shoots – Daughter and Mediterraneo – in Greece during the pandemic. One way they were able to keep shooting as restrictions tightened was that Heretic hired a “company every week that certified that protocol measures were implemented”.

“We did 1,060 Covid tests and had zero positives,” stated Karnavas.

Greek funding was from the rebate scheme EKOME and a local distributor, but Karnavas noted that non-financial support was also important. “The local authorities helped us a lot for locations and special requests. That’s priceless, it’s not just about money.”

“Heretic was very professional,” Östlund added. “The whole team was great. It was an elegant shoot. A film can be elegant, but the shoot can also be elegant. There were no people screaming on set, everyone was concentrating. We created a feeling of family on the set.”

Östlund said his long-time producer, and partner in Plattform Produktion, Erik Hemmendorff had worked miracles. “They were getting so many nervous phone calls from our cast in the Philippines, South Africa and the US,” he said. “It was a big challenge to get people to Europe. Erik kept me out of this, I only found out about the headaches afterwards.”

Östlund explained that he didn’t have to rethink any parts of the script due to pandemic restrictions. “We managed to shoot the big scenes with extras in February before the pandemic,” he said. “And when it came to the boat, we just managed to shoot it before the lockdown in Greece.”

Östlund did use some of the down-time during the virus crisis to tweak part of the script, but for storytelling purposes – not for Covid reasons.

The team still hopes the film will be ready in time for Cannes 2021 although Östlund added: “It’s about checking how the state of the world will be in May.”

In a statement, producers Hemmendorff and Philippe Bober said: “We are very happy and relieved. Financially we had to confront risks, but there was a sense of urgency and momentum. Waiting was not an option so we had to make it work. This is our the biggest achievement so far, shooting wise.”

Hemmendorff said insurance for the production – secured through Media Insurance Brokers – was in place so long before the pandemic that it didn’t have a Covid-19 exclusion. However, Plattform did have to finance an extra contingency to shoot during the pandemic.

The film is produced in association with Film i Väst, BBC, Bord Cadre Films, Sovereign Films, Heretic and Piano Films.

International sales are being handled by Bober’s Coproduction Office. SF Studios has Nordic rights to the film, BAC has rights in France and Alamode in Germany.